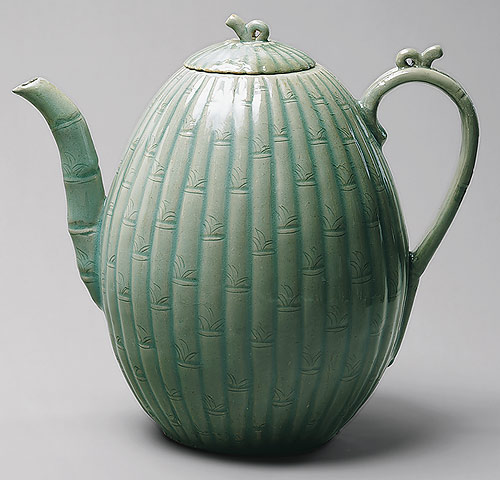 To Cho Sang-kwon, chairman of the Kwangjuyo Pottery Culture Institute, the period between 1967 and 1997 is like the lost 30 years. He saw his identity dramatically transform from a promising architect into a North Korean spy. He had freely enjoyed wealth and fame, but the loss of his dream was his most painful experience.

Defection to South Korea, which he opted for after a period of severe pain and suffering, came at a steep cost: separation from his beloved children. He said he was in such pain over that period, and a Dong-A Ilbo reporter could hardly afford to ask questions about the 30-year period.

But later in the interview, Cho recalled on his own something notable and said it was the only legacy he got from the 30 years: reinstatement of Goryeo celadon.

In 1971, ranking North Korean officials came to Cho and asked him an unexpected question: What gift will you give Dear Leader Kim Il Sung next year? They said the following year was his 60th birthday.

Cho wanted to use that opportunity to do something that would benefit "our nation", not North Korea. Then what came to mind was the idea of Goryeo celadon, which gained immediate approval to reinstate from Kim.

Cho asked North Korean authorities to find people experienced in making celadon. He said he needed people who had at least witnessed the celadon-making process. Three days later, the person he was looking appeared, a stoker, aged around 60, who was working at a pottery plant in Pyongyang. At first, he seemed to be reluctant to work with Cho.

To tell you the truth, I`m from South Korea. I came to North Korea while studying in Paris, the man said. He admitted that he too hailed from the South. It was around July.

Around eight months were needed to reinstate Goryeo celadon. The stoker produced 12 pieces measuring 70 centimeters high in March 1972. The two best celadon pieces were presented to Kim Il Sung and the next two were given to his son and eventual successor Kim Jong Il.

"Defector recalls 'restoring' Goryeo celadon in N.Korea"
by HanCinema is licensed under a Creative Commons Attribution-Share Alike 3.0 Unported License.
Based on a work from this source