"Descendants of the Sun" Song-Song Couple 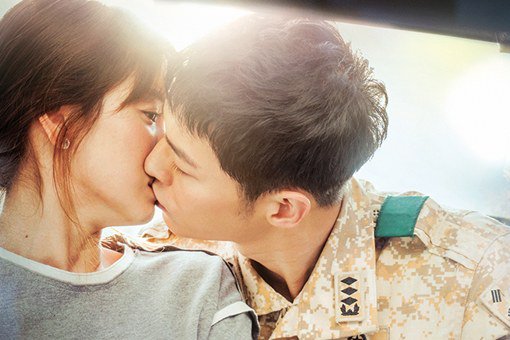 Song Joong-ki (31) and Song Hye-kyo (34) who are 3 years apart are making viewers' stomachs flutter. The two of them represent a strong man and a bold woman in the KBS 2TV drama "Descendants of the Sun". However, their couple-act proves that age doesn't matter.

Song Joong-ki and Song Hye-kyo are the most anticipated 'couple in which the woman is older than the man out of all successful couple dramas in the last 5 years regardless of gene. There have been Kim Soo-hyun (1988) and Han Ga-in (1982) in "The Sun and the Moon" in 2011 and "Kim Soo-hyun and Jun Ji-hyun (1981) in "My Love from the Star" in 2013 but "Descendants of the Sun" broke through 20% the quickest out of all of them. In addition, Song Joong-ki and Song Hye-kyo have brought out the characters to the best of their abilities.

Song Joong-ki's role of a dispatch soldier in Uruk reflects Song Joong-ki's real image of a manly guy who's done with his National Duties. The female viewers think this is impressive.

Song Hye-kyo has maintained her innocent and lovely image all the way until now and it's blending with the drama character. She's responsible and bold as a doctor but when she's with Yoo Si-jin (Song Joong-ki), she's an ordinary woman.

The two people brought favors to the drama and they are even being told that they look great together.

Their age hasn't been told in the drama yet. In the second episode, Song Hye-kyo told Song Koong-ki that she was older than him and Song Joong-ki asked to see her ID.

""Descendants of the Sun" Song-Song Couple"
by HanCinema is licensed under a Creative Commons Attribution-Share Alike 3.0 Unported License.
Based on a work from this source