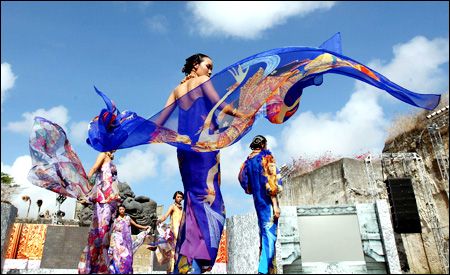 Invited to grace the eve of Bali Fashion Week 2008, the top designer presented some 130 of his works in the park where the statue of "Garuda", an immortal bird, graced the center.

"When I first visited Bali in 1988, I resolved to hold a fashion show here, a beautiful place of pure people", said Andre Kim. "I feel happy to have achieved my dream".

Sashaying to the pulsating beat of various music, the show was divided into six stages ― World Festival for 2009, Legend of Bali, Island of Gods, Romanticism of Victorian Dynasty, Unforgettable Fantasy in Kingdom of Korea and Orient, The Secret Mystery of Seven Veils and Divine Wedding of Swan Castle.

The designer showed some variety for his Bali collection that mainly consisted of evening wear and some town wear.

Han and Park first showed several elegant gowns that are the staple of the 73-year-old designer. Han is an established actress who has appeared in various television dramas and Park recently starred in the TV drama "Iljimae". In the second stage titled Legend of Bali, Island of Gods, the designer presented exotic dresses with print of Balinese gods and nature. In the romanticism of Victorian Dynasty and Unforgettable Fantasy in Kingdom of Korea and Orient, Kim presented more of his staple evening dresses. Another hallmark stage was The Secret Mystery of Seven Veils. A lone model came out wearing seven different-colored robes, to take them off one by one along to Korean traditional music. She later then collects them and laboriously dragged them in.

In the final stage Divine Wedding of Swan Castle, a series of Kim's wedding gowns were dramatically presented. Han was elegant in her white wedding, and Park, a bashful gentleman in his attire.

Kim presented some 130 pieces for the show that lasted one hour and ten minutes and was attended by some 800 guests. Kim, who has held numerous fashion shows overseas, is the first Korean designer to present his work in Bali. The show was organized by the Moda Bali Convex and supported by the Indonesian Ministry of Culture and Tourism. The Bali Fashion Week runs through Aug. 29.
____________________
Models show 09 spring/summer wear by Korean designer Andre Kim during the Garuda Wisnu Kencana Cultural Park on the exotic island of Bali, Monday.