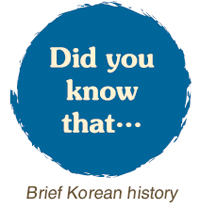 In the West, eunuchs are often thought of as emasculated men who served as harem guards in the Middle Eastern courts of the past, but did you know that in Joseon Korea they were some of the most powerful men of the realm?

While many of them did serve as guardians of the palace ladies, errand boys and the personal attendants of the royal family, others acted as trusted advisors to the Korean monarchs. Many Westerners residing and doing business in Korea - including diplomats - often found the eunuchs to be the most influential people in the Korean court because of their unlimited access to King Gojong.

Because of their influence, eunuchs were occasionally targeted for assassination. In late 1900, a Korean nobleman conspired to kidnap part of the royal family and assassinate several Korean high officials - including the head eunuch. Before he could act he was captured and executed.

Eunuchs were supposedly above worldly interests and passions but according to William Franklin Sands, an American working as an advisor to the Korean court in the late 19th and early 20th centuries, they were far from being "austere and ascetic persons". He described them as being not only "restless, eternally dissatisfied and greedy" but also "warped and suspicious by nature, jealous, moody and prone to sudden anger and vindictive hatred". He declared that their "one all-absorbing passion was money" and that "their influence (on King Gojong) was always harmful".

Sands, who obviously had no great love for the eunuchs, claimed that "they were generally from poor families, had no education [and] were quite illiterate" but made no mention of how eunuchs came to be in their situation. Undoubtedly, some young boys were made into eunuchs out of economic need or in an effort to raise their social status but unfortunately there doesn't appear to be much historical material on who did the actual castration and their methods.

According to one early writer, some of these eunuchs were victims of accidents - some of them caused by dogs. In the past, children used to run around naked and supposedly, after going to the bathroom, they were sometimes licked clean by dogs on the streets. Sometimes these dogs were a little too zealous with their cleaning and ended up nipping away their young master's manhood.

It is easy to understand how eunuchs became bitter in a society that prized sons - especially when they would never have the opportunity to sire their own. But many married and the more prosperous ones adopted young eunuch boys to act as their sons. In his medical report of Korea in 1885, Doctor Horace N. Allen wrote: "A eunuch's compound is known by it's only having one gate, instead of the usual gate for men, and another for women. This is said to be a necessary precaution for keeping the women in, as they do not like their masters and are apt to run away".

It must have been frustrating for a young woman to be married to a eunuch - forced to live a life of celibacy. And yet, Allen noted in his medical report that he treated one eunuch for a venereal disease. Apparently not everyone was celibate.