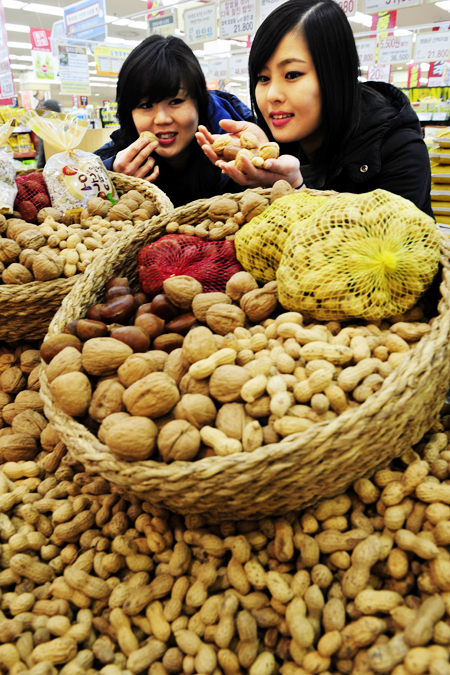 Shoppers examine a variety of nuts at a marekt. / Korea Times file

In the past, nuts were an important part of the Lunar New Year and the weeks following it. During the Joseon period, residents of Seoul would walk across the city's small bridges on the night of the first full moon. It was believed that a bridge had to be crossed for each year that a person had lived so as to ensure that they would not suffer diseases in their legs and feet in the upcoming year. It was often bitterly cold and people found comfort in roasted nuts.

According to Homer Hulbert, an early American historian residing in Korea at the end of the 19th and early 20th centuries, wrote that "one of the commonest sights along the streets in Korea is that of a boy sitting inside a little hollow, scooped in the ground and lined with clay, turning chestnuts in a charcoal fire with a pair of bamboo tongs, while with the other hand he fans the fire". The best chestnuts were from Yang-ju, just outside the East Gate of Seoul, and were, as Allen declared, huge ― "the very smallest one would be larger than the largest in America, but it is not as sweet".

But not everyone ate roasted nuts ― some ate them raw. Stands near bridges sold nuts ― usually chestnuts, walnuts, pine nuts or hazelnuts ― to people who would eat them raw so as to ward off boils and other skin disorders. Often people cracked these nuts with their teeth in the belief that it would make them (the teeth) stronger and healthier but did you know there was a darker side to this custom of cracking nut shells with your teeth?

In the late 1880s, an American visitor to Seoul described the nut-eating tradition of the Lunar New Year "as a festival of hatred, a carnival of impotent rage". It appears that during the Manchu invasion of Korea in the seventeenth century that a large Manchu army invaded Seoul just prior to the New Year and the Korean people were impotent to stop them. As a symbol of this "impotent rage" when the people of Seoul ate walnuts, they would crush the first three with their teeth and throw them into the street as a symbolic gesture of crushing the skulls of three Manchu generals or warriors.

But chestnuts weren't the only nuts with a military past. According to one legend retold by Hulbert, during the days of the Goyreo Kingdom (918–1392) might ― a large army was sent across the Yalu River and managed to exact revenge for the wrongs Goyreo had suffered at the hands of their neighbor. While the Goyreo army was garrisoned in a small walled-city they were suddenly besieged by a combined army of bandits and mercenaries. Things looked dire for the soldiers of Goyreo as they had little food and would eventually be driven by starvation to surrender. As a last resort, one of the Goyreo generals gave his men three large bags of hazelnuts and ordered that the soldiers begin cracking the nuts with their teeth. It is unclear why, but for some reason the larger enemy army lost their nerve and the siege was lifted. Not content with merely surviving, the Goyreo army rushed out and soundly defeated the withdrawing enemy.

Robert Neff is a contributing writer for The Korea Times.