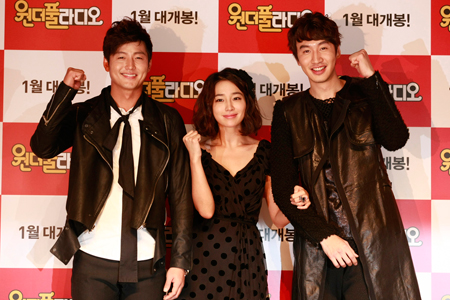 From left, actors Lee Jung-jin, Lee Min-jung and Lee Kwang-soo appear in a promotional event for the film "Wonderful Radio" in Seoul, Tuesday. / Courtesy of Showbox/Mediaplex

The greatest challenge working with Lee Min-jung, according to director Kwon Chil-in, was to strip the actress of her "goddess" image.

Lee, one of the most highly-sought leading ladies since sweeping awards last year for "Cyrano Agency", plays the idol star-turned-radio personality in the upcoming film "Wonderful Radio".

"People call her a goddess and it was tough working with that. This movie was aimed at bringing the goddess to earth, turning her into the girl next-door", Kwon told reporters in Seoul on Tuesday. "The movie is about an idol singer who had been in the spotlight since a very young age and the loss she feels when her glory days are over".

The filmmaker, best known for the romantic comedy "Singles", said working with Lee proved to be relatively easy. "Lee Min-jung may look like a goddess on the outside but she is a 'commoner' to the core. In fact, she made her debut quite late as an actor and had a very ordinary upbringing.... She went to college and everything. There aren't many actors out there with such a background".

Lee said, "I went to school, graduated and got a job as an actor, just like other people would find employment at a company or such". Having grown up listening to the radio, she said she was thrilled to take part in the film.

"I fell asleep listening to the radio every night when I was in junior high. It was my best friend", she said, adding that she enjoyed playing both a singer and radio DJ. She said she thought of popular idol groups in her schooldays such as S.E.S. and Fin.K.L. for the part. 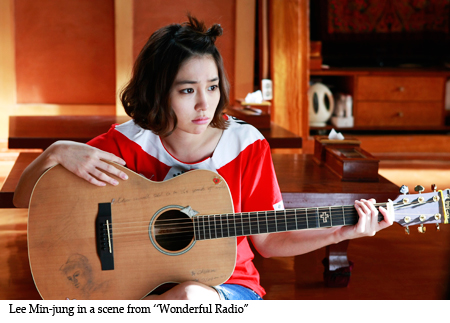 Penned by Lee Jae-ik, the producer of a high-ranking SBS show, "Wonderful Radio" takes an intimate peek at what goes on behind the making of a program. When Jin-a (Lee) starts hosting her unpopular show in an unorthodox way, an ill-tempered and smug producer (Lee Jung-jin) is hired to save the program.

Lee Jung-jin said the movie depicts the lives of celebrities in a realistic way. "Our movie reveals the hidden, far from glamorous sides of stars. It portrays things in a very comical way but also in tune with Lee Min-jung's actual personality, which is really upbeat and outgoing".

When asked about the difficulties of being in the public spotlight, Lee Min-jung said, "Dealing with misunderstandings or prejudices by the public can be overwhelming but I do not want to give up acting".

The film stars actor Lee Kwang-soo ("High Kick Through The Roof") as a goofy manager and special appearances by rocker Lee Seung-hwan, as a music supervisor, and R&B singer Jung Yup, among others.

A Showbox/Mediaplex release, "Wonderful Radio" opens in theaters in January.

"Director aims to 'de-deify' Lee Min-jung"
by HanCinema is licensed under a Creative Commons Attribution-Share Alike 3.0 Unported License.
Based on a work from this source