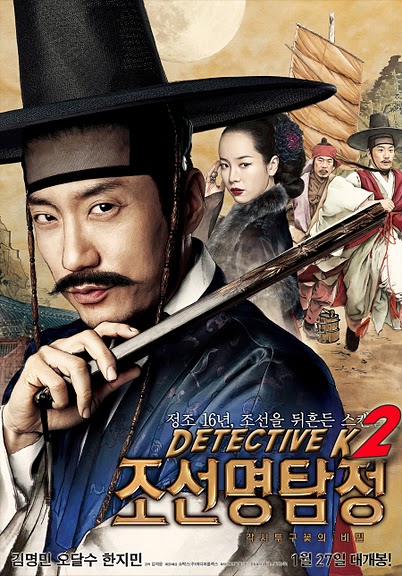 "Detective K", Kim Myung-min's latest movie, has not even been officially released to the public yet but fans are already asking for more. Director Kim Seok-yoon also hinted suggestively that if "Detective K" makes it big, there might be a sequel.

On January 17, a press screening for "Detective K" was held at Megabox Dongdaemun, Seoul. The main cast, together with Director Kim attended the press conference which followed after the screening. At the press conference, Director Kim along with the rest of the cast, expressed the fun they had during the process of filming this light-hearted production. The director was especially fond of the comical character played by Kim Myung-min and when he voiced his thoughts about filming a sequel, most of the casts agreed in unison. "On one condition", said the director cheekily, "that the movie turns out to be a hit first".

On the evening of the same day, a VIP premiere was held in Megabox COEX, Seoul and many other actors made appearance to show support for the movie adapted from Kim Tak-hwan's detective novel.

As reported by a fan who went to both screenings, the movie also ended with a hanging suspense, leaving space for imagination and most importantly, indicating the high chance of a follow-up movie. Quoting said lucky fan, "The movie is very interesting as much as I feel it's too short".

Well people, guess it's time to hurry and fill the cinemas up to the brim if you want to see more of Kim Myung-min's killer mustache.

"Detective K" stars Kim Myung-min, Oh Dal-soo, Han Ji-min and Lee Jae-yong-I. The historical comedy-mystery movie will be officially released on 27 January 2011 in South Korea and at later dates in several other countries.

Special thanks to: ljubov

"Director Kim: "Detective K" sequel is possible..."
by HanCinema is licensed under a Creative Commons Attribution-Share Alike 3.0 Unported License.
Based on a work from this source