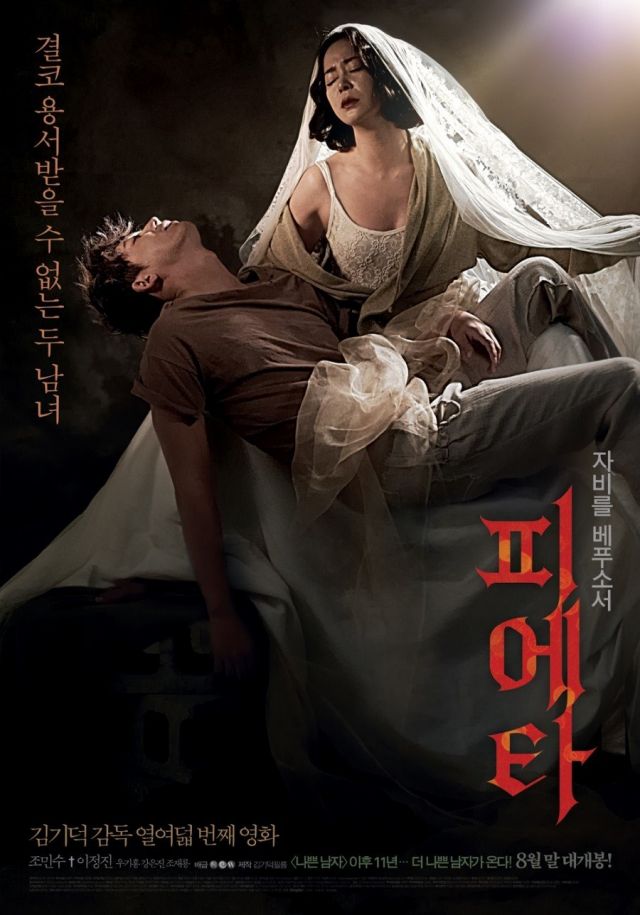 Director Kim Ki-duk who has taken over 3 worldwide film festivals is releasing his eighteenth movie "Pieta" at the end of August.

Kim enchanted the public with characters good and bad in the 2001 movie "Bad Guy" and now 11 years, he's back with a more brutal and cruel movie "Pieta".

"Pieta" which means 'have mercy', is about an evil man Kang-do (Lee Jung-jin) who meets his mother (Jo Min-soo) one day and suffer confusion while the cruel secret is revealed.

Lee Jung-jin as Kim Ki-duk's new "Bad Guy" persona, and actress Jo Min-soo who's come back as the 'black haired Maria' are attempting to put a change to their usual images.

The poster of the movie shows Lee Jung-jin and Jo Min-so imitating the picture of Michael Angelo's Vatican Pieta.

This picture is actually of the Virgin Mary holding dead Jesus Christ but Jo and Lee might be metaphorizing the picture and the phrase, "The man and the woman who will never be forgiven" brings out the curiosity in fans.

"Director Kim Ki-duk's "Pieta" to be released at the end of August"
by HanCinema is licensed under a Creative Commons Attribution-Share Alike 3.0 Unported License.
Based on a work from this source