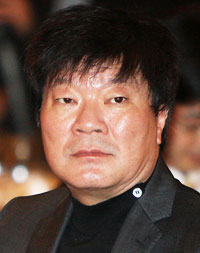 Kim Jong-hak, a drama director whose 1995 miniseries "Sandglass" was a groundbreaking moment in Korean television, was found dead at a boarding house Tuesday in Seongnam, Gyeonggi Province, in an apparent suicide. He was 62.

Kim was investigated by police in May on suspicions of embezzlement after the cast and crew of the SBS series "Faith" filed a complaint against him over unpaid wages. He had denied any wrongdoing"".

A half-burned briquette was found near Kim's body and all the doors in the room were duct-taped. Kim left a letter for his family, where he wrote he was "sorry'', but didn't mention his legal troubles, police said.

Kim's body was found by the owner of the boarding house, who went to the room because his guest didn't check out in time.

"There were no signs of intrusion and Kim's body didn't have any external injuries. The briquette and letter point to a suicide'', said a police official.

Kim, who debuted as a director in the 1981 MBC detective series, "Detective Inspector'', has been one of the most influential figures in Korean television.

After earning his stripes as a hit-producer with "Dasan Jeong Yak-yong" (1983), "Namhan Fortress" (1986), and "Human Market" (1988), his true breakthrough came with the 1992 World War II drama, "Eyes of Dawn'', which depict young Koreans caught in the maelstrom of turbulent history.

Kim then moved to freshly-established channel SBS, where reunited "Eyes of Dawn" writer Song Ji-na for "Sandglass'', which depicted the tragic relationship between three friends affected by the political and civilian oppression of the 1970s and 80s.

"Sandglass" was controversial because it doubled as a commentary on painful moments of Korea's contemporary history, including the 1980 Gwangju Massacre. It also became one of the most-watched dramas in the country's history, achieving a mind-boggling viewer rating of around 60 percent and making A-list stars out of Choi Min-soo, Park Sang-won and Go Hyun-jung.

Kim never managed to match the success of Sandglass again. He invested five years and 100 billion won in "Faith", which ended up being the biggest television flop of 2012.