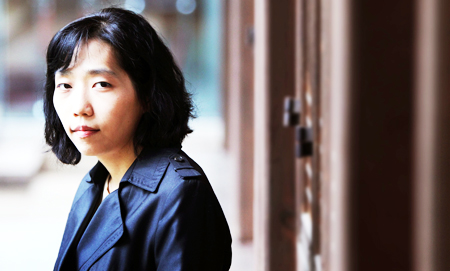 Song Yoon-hee, a medical doctor and filmmaker, speaks about her documentary "White Jungle", which looks into the darker side of health care in Korea. / Yonhap
By Lee Hyo-won

A doctor has stepped up as an ombudsman for patients who cannot afford proper treatment due to what she calls the"capitalist exploitation of the medical word" and has made a movie to make sure her voice is heard.

"White Jungle" by occupational environmental physician Song Yoon-hee has been creating a buzz online, even before its theatrical release Thursday, as it documents the darker side of the current healthcare system.

Touted as the local version of Michael Moore's "Sicko", the film opens with how hospitals are forced to spend tens of millions of won each month on advertising. Operating on profitability, many institutions rank their doctors based on numbers, such as how many patients they see and the amount of revenue they bring in. As a result, consultations last an average of 31 seconds and high-cost examinations are unnecessarily prescribed, with some professionals even receiving bonus payments for each MRI they recommend.

"Sure, medicine is an industry but it cannot compromise its role and responsibility in terms of welfare. No sick person should be overlooked", Song told The Korea Times in a recent interview in Seoul.

The 32-year-old was inspired to make the film after hearing her husband, also a doctor, worry about an elderly patient who could not afford treatment for diabetes. But because the woman owned a home she was ineligible for state support yet could not manage to pay for national health insurance either.

"There are so many contradictions in our society. There are times when we just ignore them but I picked up the camera because I felt completely shaken up", she said.

Song probes these issues through interviews with doctors, hospital staff and patients, citing news clippings and related studies, ultimately arguing against the privatization of health care.

"There is nothing really new being dealt with in my film. Unlike documentaries that have an accusatory tone, I wanted to tell stories that were already known through a more lively form of testimony", she said. "As a doctor with filmmaking experience I wanted to address the topic through an audiovisual medium".

Having always had a penchant for the arts, Song was involved with theater in high school and took a year off during medical school to enroll in a film academy. 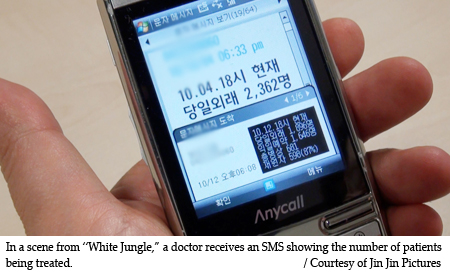 "There are many scholars out there that publish 700-page theses on the topic, but not many people would read it. I'm not a healthcare policymaker but as a doctor I do know how the system runs and I have the ability to understand these concepts. I wanted to share this knowledge with a wider public and I thought film was an apt medium".

Made on a budget of some 9 million won provided by her husband, the project entailed filming footage inside hospitals incognito using her smartphone. The result is a UCC-style video featuring grafic images, power point slides and sarcastic political commentary.

"It's sort of kitschy", she said about wanting to make things as simple and easy to understand as possible, rather than focusing on cinematic quality.

The film was initially shown to small organizations such as progressive groups and health cooperatives before being picked up by a local distributor.

But the reception wasn't always positive. "Some people, particularly conservative members of the medical community, say my film is too one-sided and that it makes generalizations on a few cases. But I wasn't trying to create a thesis. There are people who suffer from the current system and I wanted to be a voice for them".

Song says being able to straddle both medicine and cinema "is a great privilege".

"While dealing with patients during my residency I would witness some of the most tear-jerking moments, such as a son who says 'I love you' to his dying father for the first and last time. This is why we have such scenes in dramas".

A big fan of Lee Chang-dong, she would love to make a feature film one day that deals with humanitarian concerns.

"Doctor-filmmaker probes capitalist exploitation in medical world"
by HanCinema is licensed under a Creative Commons Attribution-Share Alike 3.0 Unported License.
Based on a work from this source