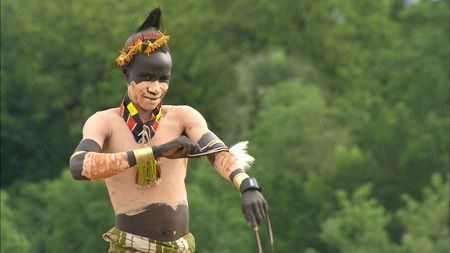 A scene from MBC's new documentary "Tears of Africa"

"Tears of Africa" is the third of MBC's "The Tears of the Earth" documentaries. The first "Tears in the Arctic" was aired in 2008, surprising fans with its high definition footage, high quality scenes and interesting storyline. The following year, MBC brought "Tears of the Amazon", which featured the forest dwelling Yanomami tribes. The series was a hit, garnering more than 20 percent in television ratings and eventually establishing the documentary trend, plus raising awareness concerning global environment issues.

The third project "Tears of Africa" deals with environmental problems faced on the continent and the hardships locals endure. Global warming and other environmental conditions have affected the continent in various ways, including the death of wild animals, scarcity in water and droughts that hinder agriculture. 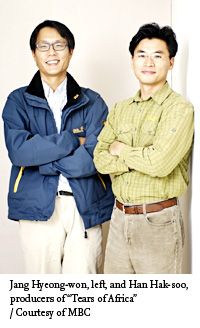 "Because we got such high ratings with 'Tears of the Amazon', we felt a bit of pressure with the next one and also had to think a lot about how to differentiate the two programs", producer Jang Hyeong-won said during a press conference last week at MBC.

A short preview of the show was also presented, leaving reporters speechless from the raw and realistic footage of Africa and its people.

"If 'Amazon' revolved around fantasy and showed respect to primitive life, 'Africa' tackles the bitter harsh reality of another continent. That would be the main difference between the two", Jang added.

The Saturday program was a prologue of the five-episode series, but it managed to capture the core of the environmental issues that the rest of the world finds easy to ignore.

It was actually a powerful and gripping manner to introduce Africa's problems to the Korean audience. The camera crew traveled along deserts and forests, paying visits to tribes and villages and learning how they cope with the changing situations. The producers visited the Fulani and Karo tribes, aiming to mesmerize viewers with realistic, authentic, and somewhat shocking footage of the people. Instead of shooting footage from a distance, the camera crew walked directly into the villagers' huts, sharing food and participating in their annual festivals and rituals.

"The most difficult problem we had to deal with during shooting was a lack of clean water, which was also an important issue in the documentary", co-producer Han Hak-soo said.

"We did take some water with us, but we had to drink and work with dirty water later on. Along with the hydration problems, we underwent several dangers, including gun fights, car accidents and malaria cases".

The program included some vivid footage, depicting dead baby elephants lying on vast desert scapes and a ritual where a girl undergoes an excruciating ceremony of tattooing her lips. At the same time, it also brought never-before-seen glimpses into festive life, such as the male beauty pageants of the Fulani tribe.

Along with heartwarming scenes of the people, the prologue also included important messages regarding environmental issues, poverty and violence. Many Africans have lost their homes due to xenophobic issues within the continent, while numerous families have been separated because of financial problems. The upcoming episodes will tackle such issues in depth and further remind viewers of what is actually happening in other places, on the other side of the world.

Along with the content, the celebrity narrators of the series have also been making headlines. Actor Hyun Bin fulfilled the role of narrator for the latest installment of the documentary series, following in the footsteps of actors Ahn Sung-ki ("Tears in the Arctic") and Kim Nam-gil ("Tears of the Amazon").

"It was shocking and surprising because it was not the Africa I had known in the past", the actor was quoted as saying by MBC. "I hope the program will help raise awareness and resolve problems currently plaguing Africa".

According to MBC, it took some 1.2 billion won, one year of research and 307 days to complete the filming, raising the bar for local documentaries.