Dooly to Return to Small Screen 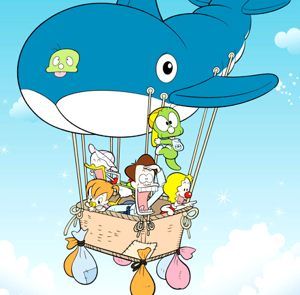 One of Korea's first animation characters "Dooly" will appear on the small screen for the first time in 21 years, with the aim of making the small green dinosaur an international culture asset.

At a press conference for the airing of the new animation last week at SBS, cartoonist Kim Soo-jung appeared with a bright smile, evidently happy to be introducing his new work.

The new 26-episode television series will start on Christmas morning and continue though next year every Thursday, the first time the character will be on television in a long time.

Unlike the past when he worked only as the cartoonist, Kim actively joined the project as a director.

"I wasn't satisfied with the previous episodes, so I participated in every part of the process this time, from scenarios to editing", he said.

Dooly started as a short comic strip in 1983, and was animated for television in 1987. The story of the stranded dinosaur and the family who took him in as a pet captivated fans, and the characters appeared in books, as dolls and other merchandizing items throughout the years. It was even made into a full-length feature film "Agigongryong Dooly" in 1996, being sold for $300,000 to European companies.

Kim expressed his worries about cartoon characters these days, and promised that he will continue to bring Korean culture to his works.

"When you look at cartoon characters today, you can't find anything Korean about them. That's why they have such a short life span. It may be hard to attract the world with characters that represent our culture, but once they become appreciated, they can further spread our culture and put Korea on the map", Kim said.

The cartoonist added that he will make Dooly use chopsticks and spoons, and also eat traditional food like doenjang jjigae, soybean paste stew, citing the need to include Korean traditional lifestyles in his work.

The new series has a different theme song and narrator, but the basic storyline about the stubborn dinosaur and comical family members will still be the same.

"The story will be more like the original cartoon strip, a bit more edgy perhaps? I even considered changing Dooly's personality considering the change in preference among young kids these days. But when a young boy came to me and said that he enjoyed the part that people back in the day enjoyed as well, I thought we were good to go", Kim added.

The teaser trailer of the television show has already attracted buyers from Spain and Malaysia, and season two will be in the making soon.

"As an adult and a writer, I want our children to be proud to know that we have animation like this in Korea", Kim said smiling.

"Dooly to Return to Small Screen"
by HanCinema is licensed under a Creative Commons Attribution-Share Alike 3.0 Unported License.
Based on a work from this source