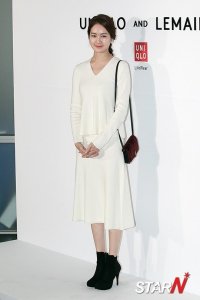 "Does my hair style look a bit strange? I wanted to look like a doctor".

Lee Yo-won, 27, had her hair short and permed and was wearing a medical gown. I interviewed her at an examining room furnished with nothing but one bed. Lee is going to play the main character of an SBS drama titled "Surgeon Bong Dal-hee" to be aired at 9:55 p.m. on every Wednesday and Thursday starting from January 17. On January 2, I "examined" her at the set decorated like an emergency room in a studio located in Hwaseong, Gyeonggi.

Lee came into the examining room with her hands deep in pockets. She said that the realistic set with hospital equipment such as bloody sheets and Ringer's solution makes her feel like a doctor tired from night duty.

"It's like I've been hospitalized since we started shooting. I have headache. A hospital is not a place to stay long", said she with a smile.

In this drama, Bong Dal-hee is a resident physician who keeps her heart disease a secret and desires to be a specialist in children's hearts. Like the sound of her name, she is an interesting character who makes mistakes and is called "trouble-maker" by her colleagues.

"I'm so excited to take this role. My previous melodramatic characters were always depressed and crying, so I wanted to be different this time".

Producer Kim Hyeong-sik said, "I chose to go against people's expectations based on Lee's stereotyped images. After starting shooting, I found my choice was right. Lee is the very Dal-hee character who is strong and friendly". Lee took crying-baby type characters in another SBS drama, "Fashion 70s", and movies such as "A.f.r.i.k.a" and "When Romance Meets Destiny".

The new drama shows Dal-hee hesitating in a three-cornered relationship with Ahn Jung-geun (Lee Beom-soo) and Lee Geon-wook (Kim Min-joon) as she becomes mature as a doctor. Lee said that teamwork is very good as the two male actors encourage each other unlike the drama's story.

"Lee Beom-soo, a movie star, feels strange acting for a TV drama. He kept saying, 'It's so different from making a movie'".

Lee learned how to do cardiopulmonary resuscitation at Seoul National University Hospital. She now knows a few simple medical facts such as "double-line stethoscopes are better than single-line ones". However, she is also worried about NGing using professional terminologies.

"I watched the U.S. medical drama, 'Grey's Anatomy'. I'm only acting but it's still hard to be a doctor".

Lee married young and has a daughter unlike other actors. She said, "I want to be an actor who can move the audience with truth. My New Year's wish is to succeed in my work".

She added, "I hope that the drama makes number one among dramas aired on Wednesdays and Thursdays and that the movie 'Splendid Holiday' makes a hit. I wish to be blessed in my work".