Drama of the week "Coffee Prince" 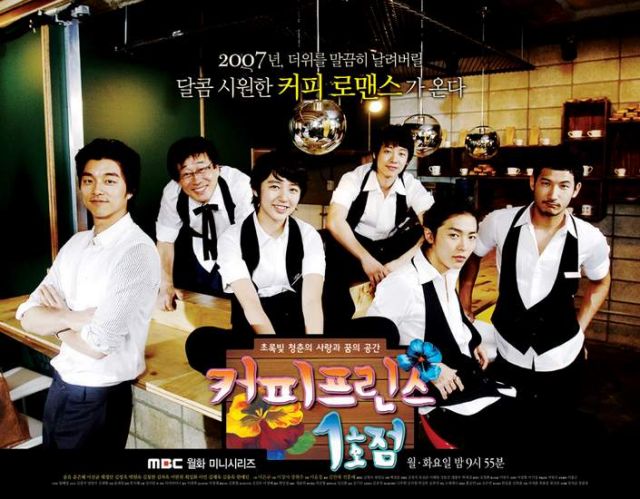 17 episodes
Synopsis
Coffee Prince's Flagship Store is a TV series that revolves around the love life and dreams of four young people who meet together at a café.

Han-gyeol (actor Gong Yoo) is a smart young man who hates to be tied down to one career in his life. Abhorring the idea of joining the family business, he is ordered by his grandmother to manage a café. Unable to disobey his grandmother, he reluctantly takes over the responsibility of running a café and begins to immerse himself in the gourmet coffee business. One day, he meets Eun-chan, a cheerful girl who has an unpredictable personality, and learns the meaning of true love...

< Coffee Prince's Flagship Store> is a story about a group of young people who find themselves drawn to the gourmet coffee business where they also find love and new hope. The TV series will also show what it takes to run a family business and become a true steward who can oversee a company.


A café with a view.

In the dreary city with towers of concrete structures everywhere… The dynamism of the younger generation brings energy to the lifeless city...
When you commute on a bus through the city, you'll find yourself looking with pity at the people walking by skyscrapers. But it's people like those you see in the streets who build these tall buildings and work hard inside the offices to create new hope and dreams for themselves and other people. The city can be an unfriendly place. Then what brings energy and warmth to the city? It's the hard work of people who have lofty dreams and hopes for a more fulfilling life. Like an embroidery piece that requires many hours of cross-stitching threads with a small, thin needle, the people in the city are the fabric of society. We live winding lives that are not ordinary inasmuch as they are precious to our very existence. And this coming-of-age story about four young people will fill your heart with a new hope.

"There is a special aroma from coffee beans that will move your heart".

It was in 1896, when King Kojong was served coffee at the Russian Embassy for the first time by a woman named Sontak, who was the sister-in-law of Russian Ambassador Veber. This was the first time and place where coffee was introduced to a Korean. In the 1920s, Japanese cafés, which were called Kikdajeom (喫茶店) began appearing in Seoul. The first café that was opened by a Korean was called Kakadyoo and it was owned by film director Lee Gyeon-seok. At the time, there were three Kikdajeom stores that were popular in Seoul. The cafés that opened after that became popular hotspots among novelists, actors, and musicians.

So cafés became a natural gathering place among people Some people avoided drinking coffee because they believed it was unhealthy but even among non-coffee lovers, they would probably all agree that coffee has a deep, rich aroma. Most people probably stopped once in their lives to smell the aroma of coffee from a cafe.

The smell of coffee will greet you in the morning. At work, co-workers will offer each other a cup of coffee.
Couples drink coffee on their first dates as they get to know each other better. People have coffee after a long day with their loved ones. Coffee is a drink that is ubiquitous in our lives. It brings people together.
A cup of coffee is a time for people to enjoy a short break from their busy lives …

A cook who can make a dumpling in 3 seconds. A candlemaker who can make holes in 120 candles in seconds. A newspaper delivery man who carries a load of newspapers weighing 300 kilograms on his back. Have you ever seen these remarkable people? These people became skilled at what they do because they focused on what they were good at and practiced it over and over. They sweated over jobs that other people overlooked and became skilled workers. It's time to reflect on what is truly important in building a successful business instead of focusing on the bottom line,

'How could I kiss that poor-looking, overdressed kid?!'
He washes his mouth with Listerine but he cannot forget the disgust of that moment.
The moment when their lips touched…
He is smart and witty but he is a restless soul who cannot commit himself to one line of work.
He is a self-absorbed person and he doesn't like bothering other people nor does he like being bothered himself. He is an independent person and he shows no interest in the lives of other people. But deep inside, he is a warm person.
There are many things to do in life but he doesn't want to be stuck with inheriting the family business. His grandmother forces him to manage Coffee Prince one day...
Unable to disobey his grandmother, he discovers the rich aroma of coffee while working at Coffee Prince and he also fall sin love with the unpredictable Eun-chan...

"Who cares if you're a man or a woman. You have to make a living, you know..."
One day, she meets a handsome man who makes her wish that she could look attractive like a lady...
When she walks down the streets of Myung-dong, young girls will shriek and stare at her pretty boy looks.
But she's not a boy. She's a woman who has a black belt in Taekwondo and talks in a husky voice like a guy.
After her father passed away, her family was able to make ends meet through the help of relatives for 8 years.
She supports her family who live in a small one-room rooftop apartment.
Since her father loved the taste of coffee, she developed an uncanny ability of telling apart different coffee just from smelling them. Later on, she finds a job at Coffee Prince. She aims to become a barista one day.
To reach her career goals, she first has to deal with the cold and aloof Han-gyeol who she finds herself falling for...

Yoo-joo left his life. He was angry at her and felt betrayed. But his feelings for her have also changed.
He was just incapable of handling a separation...
He is Han-gyeol's cousin.
He is a stubborn artist who has a romantic side and easy-going personality.
When he meets strangers, he greets them with a friendly smile and talks freely about a range subjects with them but he never reveals his inner feelings.
He stays away from the family business unlike his family members and relatives and finds himself as the outcast of the family, which makes him a lonely soul. He comforts his soul by turning to music.
He is in control of every aspect of his professional career and is good at what he does but due to his past relationship with Yoo-joo, he is not comfortable around woman.
So when he meets Eun-chan, who has a pleasant smile and puts people at ease, he is immediately attracted to her...

Being free from the desire to have true freedom!
She madly sings and dances while also madly falling in love. And she wants to be free from all those mad habits of hers'.
She is a passionate woman. Her alluring hair seems to have the powers of Samson. Each strand of hair seems to give her a wicked intellect. She is a free-spirited nonconformist. She is liberal, sexy and very delicate.
Because of her nonconforming attitude, it is easy for her to make new friends but they also find her personality to be too liberal.
Although she is never intimidated by anything in life, she has a tender soul and is emotionally vulnerable.
Although she loved Choi Han-sung, she left him to go to New York and pursue her passion for painting.
She later realizes that she is still in love with Han-sung and returns to Seoul but Han-sung does not take her back...