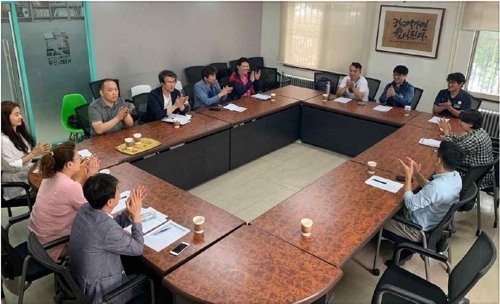 The National Union of Media Workers announced on the 20th that a four-way joint consultative body consisting of the three ground-wave broadcasters, KBS, MBC, and SBS, the media union, the Korean Drama Producers' Association and the Hope Alliance's Broadcasting Staff Branch has come to a basic agreement on the guidelines for the drama production environment.

For more fluent communication for staff on site, a consultative body for laborers will be operating on every site. The directors of broadcasting stations, production companies, and staff representatives can discuss working hours, breaks, industrial safety measures, and other working conditions through it.

CJ ENM, which includes tvN and OCN, showed its support for this idea. Its subsidiary company, Studio Dragon, participated in the basic agreement on the guidelines for drama production as a member of the association, and it plans to apply the guidelines in the future.

"The four subjects participating in the joint consultative body have made a valuable agreement through continuous discussion", the National Union of Media Workers said. "The basic agreement on the guidelines for the production of dramas will be a valuable medium to bring changes in drama production in the future".

"Drama Production Sites Introduced With Standard Work Contracts "
by HanCinema is licensed under a Creative Commons Attribution-Share Alike 3.0 Unported License.
Based on a work from this source