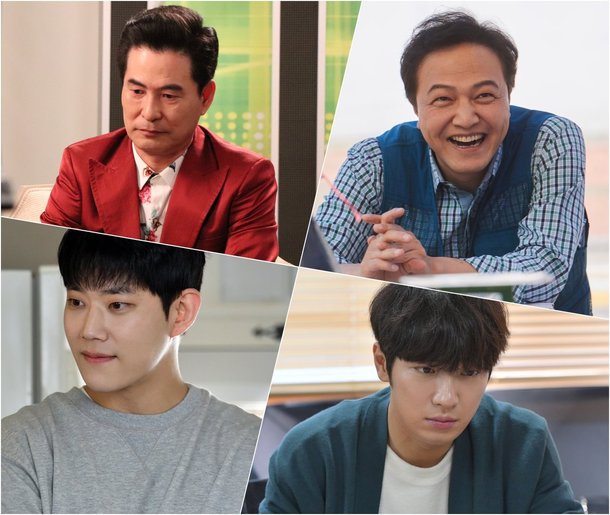 UHD KBS's "Drama Special 2020" has unveiled all 10 colorful lineups. Among them, the fun of fresh characters is the key point that prospective viewers are interested in. While Yoon Ji-on, Ji Seung-hyun, Kim Dae-geon, Oh Min-suk, and Shin Hyun-soo are raising interest by telling stories previously told by them, the production team revealed the second additional curious story of Lee Han-wi, Jung Woong-in, Dong Ha and Lee Sang-yeob.

#1. Daughter-fool Lee Han-wi in "Drama Special - The Place We Put the Lilacs"

"The Place We Put the Lilacs " (directed by Park Gi-hyeon and written by Park Kwang-yeon), which will air at 10:30PM on November 28th, is a human drama about a trot singer and his daughter moving away from a life of false play to find real happiness. With his passion for his work and solid inner workings, Lee Han-wi plays the impersonator of famous singer 'Lilac', Ra Jin-seong, who dominated the 1990s. When his wife ran away, he took his little daughter and raised her by himself on the night stage. He is a 'daughter-fool' who does everything for his daughter. It is curious whether the affectionate father will grant his daughter's wishes of becoming the real 'Lilac' and not an impersonating singer.

"Drama Special - Trip" (directed by Yoo Kwan-mo, written by Yeo Myung-jae), which will air at 10:40PM on Thursday, December 3rd, depicts a story of looking back on what people, parents and children are through the friendship between a grandmother who is a master of business and a humble fruit seller. Actor Jung Woong-in plays Bang Soon-cheol, the owner of a local fruit truck. He runs a fruit truck, and he is a nice guy who is not supposed to do business because of his soft personality. Therefore, he can't sell fruits at a reasonable price and even if grandmother, Geum Yeong-ran (Son Sook), acts recklessly, he just laughs about it. Expectations are high not only on Jung Woong-in's transformation in acting, but also on the warm message that he will create with great actress Son Sook.

"Drama Special - Stealing Sleep" (directed by Choi Sang-yeol, written by Park Kwang-yeon), which will air at 10:40PM on Thursday, December 10th, is a growth romance in which ex-lovers begin to get to know each other once again by starting a strange cohabitation. Returning to "Drama Special - Stealing Sleep", Dong Ha plays Lee Nam, an ex-boyfriend of Hong-joo (Kim Bo-ra) and a senior in business administration. He plans to portray the subtle and elegant changes he feels in the strange cohabitation with his ex-girlfriend, who has no home or money.

"Drama Special - Traces of Love" which will air at 10:40PM on Thursday, December 17th, is a real-life romance drama that points to the remaining feelings of love that have already ended. Lee Sang-yeob plays Jeong Ji-seop, an assistant manager of an architectural office who will look back on the traces of his past relationship, which was sweet and bitter when he is reunited with his ex-girlfriend Lee Joo-yeong (Lee Yoo-young) who he broke up with three years ago. As a result, he is expected to wake up the pink love cells once again, freely crossing comic and serious sides he portrayed in the popular KBS 2TV weekend drama "Once Again".

""Drama Special 2020" with Lee Han-wi, Jung Woong-in, Dong Ha and Lee Sang-yeob"
by HanCinema is licensed under a Creative Commons Attribution-Share Alike 3.0 Unported License.
Based on a work from this source