Dramas and Reality Meet in the 'Cheating Era' 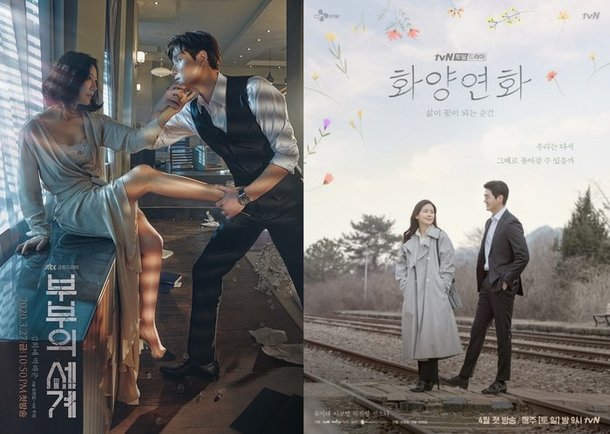 Infidelity is everywhere. The explosive popularity of jTBC's Friday-Saturday drama "The World of the Married", which recorded a viewership of 22.9% (based on Nielsen Korea), has brought back attention to the drama's main material, 'infidelity'. In the past, infidelity was only used as provocative material, but it has recently been treated differently by creating a luxurious atmosphere. Along with that, there were a series of issues with the affairs between casts in the broadcasting industry. Rumors of infidelity by some celebrities in the past have been raised again.

In "The World of the Married", infidelity runs through the entire drama. The revenge of Ji Seon-woo (Kim Hee-ae), who eventually learned about the affair of her husband Lee Tae-oh (Park Hae-joon), leads the drama. Ji Seon-woo's revenge, angered by Lee Tae-oh's double appearance who played the perfect husband in front of her, becomes the driving force behind the drama. If "The World of the Married", based on the British BBC drama "Doctor Foster", has a 19 rating and contains violent and provocative scenes, tvN's Saturday-Sunday drama "When My Love Blooms" depicts infidelity as a loving melodrama. "When My Love Blooms" beautifully and sadly portrays the reunion of a man and a woman, who have been reunited after 26 years with everything reversed. However, the key is how Han Jae-hyeon (Yoo Ji-tae), who is married, will resolve the set up of emotions over meeting his first love again.

MBC TV show "Where is My Home" was broadcast without the appearance of a client who asks for a home. It has been alleged in the online community, that the newlywed couple, who have already finished filming, is a couple of adultery. The production team of "Where is My Home" edited the couple's portion and removed the phrase 'newlywed' saying, "It's hard to know exactly whether it's true or not about their private life". Reenactment actor A, who starred in KBS Joy's "Relationship Tips 3" was also embroiled in an affair controversy. The incident became known on the 24th after reports that A had an affair with her cousin, a doctor brother-in-law. On the same day, the production team of " Relationship Tips 3" said it was 'confirming the facts'.

Celebrities are not an exception. Actress Song Yoon-ah replied on a comment asking, "I have a question. Isn't it a real affair?" on her social media on the 26th. She drew attention by directly denying rumors of having an affair. She commented "It's morally wrong and it's something that should never be done". Song Yoon-ah started dating in 2006 when actor Sol Kyung-gu got divorced and has been plagued by a controversy of infidelity, as she is known to have been married in 2009. Actress Jung Eun-chae, who is starring in SBS's "The King: Eternal Monarch" is also back in the spotlight over allegations of an affair with singer Jung Joon-il a decade ago. Both Jung Eun-chae and Jung Joon-il were reluctant to comment, saying that it was 'over 10 years ago for something very personal'.

Regarding the popularity of infidelity dramas such as "The World of the Married " Professor Nam Ye-jong and Professor Lee Ho-kyu said, "Dramas contain fiction and fantasy like movies. Only when stimulated through more powerful themes will the ratings rise", he said. He then said, "Unlike ordinary people and celebrities divorcing due to personality differences and economic problems, dramas are more thrilling and exciting because the story is woven into the keyword of infidelity and betrayal".

Some analysts say that the recent increase in the number of adultery issues is due to the abolition of the adultery law in 2015. Professor Lee Ho-kyu explained, "In the past, infidelity was considered a big crime, but people's perception seems to have been somewhat lifted since the abolition of the adultery law", adding, "There is a trend of pursuing their own privacy amid legal boundaries such as using separate rooms and graduating marriages, adding to the perception that 'it could be'".

"Dramas and Reality Meet in the 'Cheating Era'"
by HanCinema is licensed under a Creative Commons Attribution-Share Alike 3.0 Unported License.
Based on a work from this source