Dramas following "My Love from the Star" 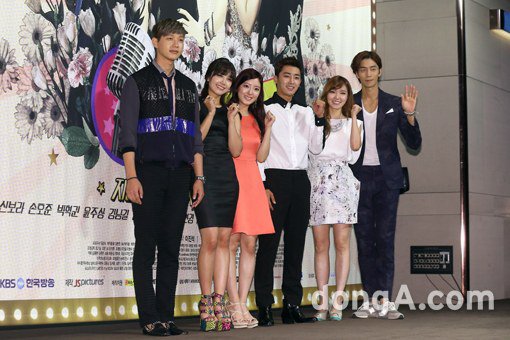 The three national broadcasting stations have been coming up with romantic comedies or mellow dramas. It's been analyzed to be a strategic move with the international market in mind.

Starting off with the KBS 2TV "Trot Romance", many of the dramas being released this year are all romantic comedies or mellow. KBS 2TV "Discovery of Romance", "Nodame Cantabile", MBC "Fated to Love You", "My Spring Days", SBS "It's Okay, That's Love", "Temptation", "My Lovely Girl" and others to follow.

The flow of the dramas contrasts with those like "God's Gift - 14 Days", "Three Days" and "Inspiring Generation" which were broadcasted at the start of the year. Culture analysts and drama creators even presented predictions early this year saying, "The viewers' need for mellow and Cinderella stories have gotten higher. There will be new genres of dramas being released soon".

It is being said that the lineup for romantic comedies and mellows has something to do with the fact that "My Love from the Star" this year made a huge hit in China. The Seoul National University Asian Study Lab held a forum in the theme, 'The understanding of the Chinese Society through "My Love from the Star"'. University professors and Beijing TV station officials chose mellow and romantic comedies as Hallyu competition.

It was pointed out in Korea that similar subjects and stories increase fatigability but China claims it works because it's easier to relate to foreign viewers and fans. To follow the trend overseas means overlapping in some contents; however, there's no competition in just popular genres and there's certainly a need to utilize various subjects.

"Dramas following "My Love from the Star""
by HanCinema is licensed under a Creative Commons Attribution-Share Alike 3.0 Unported License.
Based on a work from this source