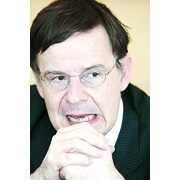 What are South Korean children told about North Korea? How has the North been presented in South Korean education? These are important issues since in many ― if not most ― cases one's worldview is determined by what he or she learned at school.

Education in South Korea is dominated by the state, perhaps to a somewhat greater degree than in many other developed countries. From the end of the Korean War until the collapse of the military dictatorships in the late 1980s, the state attitude towards the North was highly negative.

Suffice to say that until 1972, North Korea could not be described as "North Korea" (북한) in South Korean official documents and media. The only proper description was "Bukgui" (북괴), literally meaning "Northern puppets".

Many Koreans in their 40s and 50s might occasionally tell you that in their childhood they believed that the northern half of the Korean Peninsula is actually populated by demons ― real demons, that is, complete with tails and horns. Sometimes one can come across statements that such stories were part of obligatory, anti-communist education during the rule of the military dictators.

Frankly, I am slightly skeptical of such statements. A few years ago, I looked through textbooks of the 1960s and 1970s. Somewhat to my surprise, these "anti-communist educational" materials were less biased than I had expected. In most cases the statements were factually correct and nobody said that North Koreans were not human. Rather they were presented as victims of a brutal regime. Nonetheless, the general tone of the narrative was charged with hatred and this would have influenced a child's perception.

This shrill (even if factually correct) propaganda is probably partially responsible for a sudden outburst of pro-Pyongyang sympathies in the mid-1980s. Those Koreans born in the 1960s and went to university in the late '70s and early '80s, grew very suspicious of the official anti-communist hysteria. A significant minority of them in the '80s rejected the official anti-communist line outright. For them, the anti-communist dictatorship was the enemy and hence the North Korean hereditary dictatorship, being as it was the "enemy's enemy", was attractive.

This infatuation with Leninist economics and nationalist Stalinism proved to be short-lived. It generally evaporated by the mid-1990s when it became clear that North Korea is by no means a paradise of equality, workers freedom and social welfare. However, this new generation of educationists came to see old school anti-communism as anachronistic and repulsive and began to drift in another direction.

From the mid-1990s, among the younger South Korean intellectuals it became almost a taboo to be excessively critical of the North Korean regime. Such criticism was seen as retrograde and, for some incomprehensible reason, non-democratic.

Sometimes this leads to curious situations, as any reader of the Korean left-leaning media would testify. On the pages of Hankyoreh Shinmun and similarly leftist newspapers, the late South Korean strongman Park Chung-hee would invariably be called "dictator". But the same "D-word" would seldom ― if ever ― be applied to the North Korean hereditary strongmen.

When the left-leaning Kim Dae-jung administration came to power in late 1997, they began to promote the idea of reconciliation with the North. They did not want to say anything critical of North Korea's "overlords", even though shortcomings of its system still could be admitted in passing.

In the era of official anti-communism, schoolchildren were told endless stories about the brutality of the North Korean government and the suffering of the common people. From the late 1990s, their intellectual diet went to opposite extremes; kids were told to draw pictures depicting the northerners as their brethren who are reasonably happy in their own, if slightly peculiar, way. The North – usually implicitly equated with the "North Korean regime" ― came to be seen as a partner in cooperation.

This might all sound good but in most cases reconciliation-minded educators were essentially waxing over the real problems most North Koreans face in their lives and equating the country with its tiny hereditary elite.

When the political right regained power in 2007, the pendulum did not really move back that much. The official depiction of the North became less rosy, but only to some extent, especially because the influence of the left in academia and education was steadily growing.

These days, the entire issue is losing its initial significance, since the younger generation no longer cares that much about the North. For people born after 1990, North Korea is becoming irrelevant. It is just another country whose population happens to speak the same language.

Neither the right nor left is happy about this development. Predictably, they blame one another for the obvious decline in popular interest in unification. But this finger pointing is meaningless. After over 60 years of separation, this is exactly what one should expect.

Professor Andrei Lankov was born in St. Petersburg, Russia, and now teaches at Kookmin University in Seoul. You can reach him at anlankov@yahoo.com.

"Education about N. Korea"
by HanCinema is licensed under a Creative Commons Attribution-Share Alike 3.0 Unported License.
Based on a work from this source