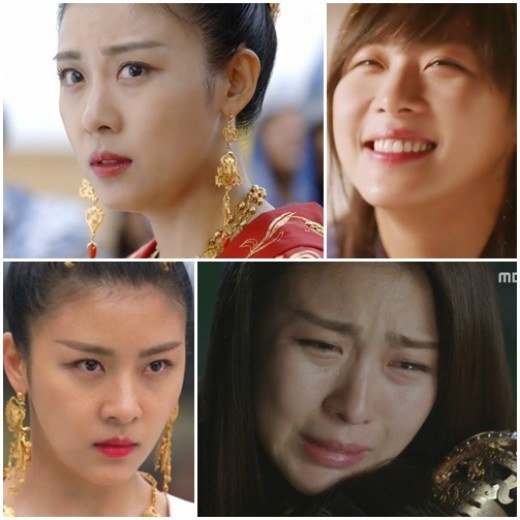 A roughneck, a mother, an empress. These are some of the faces shown by actress Ha Ji-won in the last 7 months. She has become the kind of actress who can change her face to however the situation needs. All issues about her acting have been wiped off in this drama. Acting is the only thing that makes sense to her.

MBC drama "Empress ki" ends on the fifty-first episode. Ki Seung-nyang (Ha Ji-won) stands on the top of authority as she becomes the lawful empress of Emperor Ta Hwan (Ji Chang-wook). However, it's not over until it really is. Enemies are always after their necks.

Seung-nyang's enemies are Soo Ryeong (Golta, Jo Jae-yun) and the Queen Mother (Kim Seo-hyung). They've come together against her and are stronger as a result. The final episode will show Ki Seung-nyang's fight at the peak. She's furious because she lost Wang Yoo (Joo Jin-mo) and their son Maha (Byeol) at the same time.

In October last year, "Empress ki" started off with many concerns. Opinions were diverse and many even brought up misinterpretation. Once the lid was up, everything turned around. Everything was based on fiction and far from the truth; however, the drama didn't feel all like fantasy as the storyline sprung to life with Ha Ji-won doing an excellent job.

Ha Ji-won was a roughneck, disguised as a man at the beginning of the drama. And she looked nothing like she does now compared to the beginning. She was then taken away as a court lady; everything changed as she lost her child. She was full of hate and revenge, sometimes even looking creepy. She changed into an empress over the last 7 months. It was only possible because she is Ha Ji-won.

Her strong point is that she can perform action and mellow at the same time. She appealed with a familiar atmosphere in the beginning, but added more appeal to herself and drew in the viewers. She went from immature roughneck to a distraught mother and then to a royal who schemed to have her enemies wiped out. Her face looked different with the development of her character.

Ki Seung-nyang is a character who is able to change in width and depth. If she wasn't seasoned enough, then she wouldn't have been able to catch up with the rapid change of character. However, she seemed like she was enjoying herself.

Ha Ji-won worked really hard. There is an episode that shows how much work she put into it. In the middle of the drama, she drops her newborn baby Byeol off a cliff. It was so cold during this scene that anyone's toes and fingers might've frozen off even just by being still. The script read that she wandered around the lake, but Ha Ji-won insisted that she went inside. The temperature was below 20 degrees and although the staff tried to talk her out of it, she argued, "what kind of a mother who just lost her child would just wander around the water?"

Ha Ji-won managed to pull off fifty-one episodes in a 7-month long drama. It ended successfully thanks to her devotion and sacrifice. This message has clearly been delivered to those who've been watching it as well. There's nothing this actress can't do now. She's been through action, mellow, motherly love and tragedy. She also knows how to assemble with her co-stars. Who's going to be against her acting now? She's the best.

""Empress ki", Day 1 to today with Ha Ji-won"
by HanCinema is licensed under a Creative Commons Attribution-Share Alike 3.0 Unported License.
Based on a work from this source