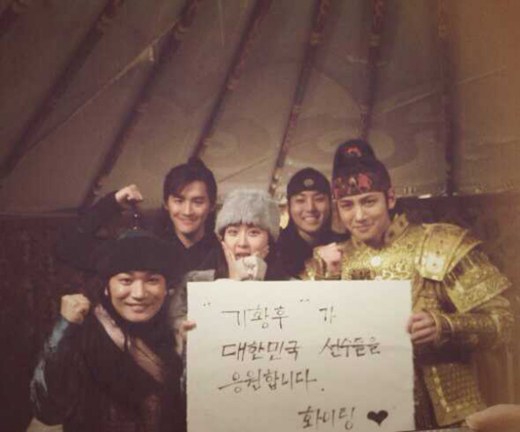 MBC drama "Empress Qi" and the crew sends a message of support to the national athletes in Sochi.

Actor Kim Moo-young posted on his Twitter, "There's not much of Sochi left and I'm cheering for our national athletes!" along with a picture.

The picture shows Ha Ji-won, Ji Chang-wook, Jeong Yoon and others posing together with a paper that says: ""Empress Qi" cheers for our national team!"

Meanwhile, Sochi 2014 Olympic Winter Games started on the 7th and will end on the 23rd.

""Empress Qi" supports the Winter Olympics"
by HanCinema is licensed under a Creative Commons Attribution-Share Alike 3.0 Unported License.
Based on a work from this source