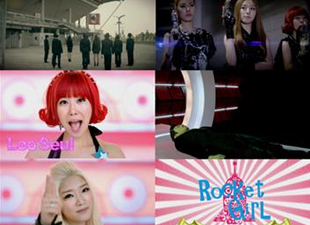 Originally set for a early summer debut, the girl group Stellar, formed by SHINHWA's Eric Mun, had been pushed back due to one of the members, Kim Gayoung, taking a role in the KBS drama "Spy MyeongWol".

However, Top Class Entertainment, Stellar's agency, has finally decided to debut the group having released the music video teaser for "Rocket Girl". The official debut date is August 25th.

The girls Ga-young, Lee-seul, JOA, and Jeon-youl will soon unveil their song, composed by Kim Do-hyun (the man behind Lee Hyori's "10 Minutes"). The album was not only directed by Eric Mun, but he also featured as a rapper on the title track and in the music video.

"Eric's Group Stellar To Debut"
by HanCinema is licensed under a Creative Commons Attribution-Share Alike 3.0 Unported License.
Based on a work from this source