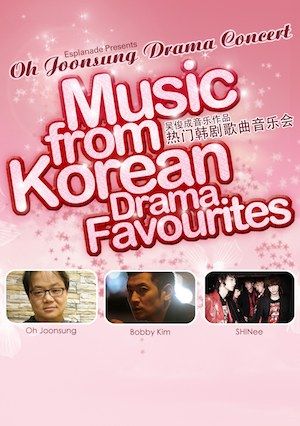 Esplanade - Theatres on the Bay will be presenting a Korean concert entitled Oh Joonsung Drama Concert - Music from Korean Drama Favourites on 1 & 2 February 2010. This performance features songs and instrumental pieces from soundtracks of some of the most popular Korean drama series written by composer, arranger and lyricist, Oh Joonsung.

Considered one of Korea's most sought-after composer/lyricist, Oh Joonsung will direct his 9-piece band, Green Cacao and a 23-piece orchestra specially put together for the concert. Some of these songs will be accompanied by music videos from the dramas. Joining them will be Korean popstars Bobby Kim, SHINee and Mario who will perform their signature tunes from the dramas, "Dream - Drama", "My Girl", "Get Karl! Oh Soo Jung", "A Witch in Love", "King and I", "The Queen Returns", "No Limit" and "Boys over Flowers".

As a centre for everyone, Esplanade wants to cater to the tastes and preferences of as large an audience range as possible  this includes the fans of Korean dramas. With the Korean Wave phenomenon so huge in Singapore, it was thus decided that a concert that features the music from Korean dramas be put together for drama enthusiasts, the Korean community, as well as anyone who would spend an evening of unforgettable music with one of Korea's sought-after composer, Oh Joonsung with Green Cacao, Bobby Kim, SHINee and Mario.

Besides distinctly programmed presentations such as Oh Joonsung Drama Concert  Music from Korean Drama Favourites, Esplanade also has a wide range of festivals and programmes that continually cater to as many audiences as possible. More information can be found her (Open the link).