Eugene starts filming her first drama post pregnancy : "a mixture of a pinch of nervousness and anticipation" 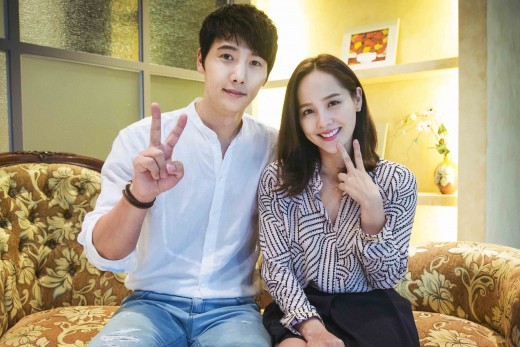 Actress Eugene commented on her feelings about returning to the drama set after giving birth.

Eugene makes a comeback to the small screen as the protagonist, Lee Jin-ae, of a new KBS2 weekend drama "All About My Mom" (written by Yoon Kyeong-ah and directed by Lee Geon-joon). The character of Kang Hoon-jae who is the male lead and Eugenes love interest is played by actor Lee Sang-woo.

The first day of filming, conducted recently, was about an episode in which Lee Jin-ae and Kang Hoon-jae have a weird first encounter in a female restroom. Even though Kang Hoon-jae is a perfectly normal looking man, it is the perfect situation for Lee Jin-ae to think of him as a pervert.

Because they were filming their characters "meet-cute" scene, the two actors faces seemed to be full of anticipation. Seeing the two acting all considerate and trying to find their rhythm made onlookers feel all warm inside. Afterwards, Eugene said that "the first day of filming is always a mixture of a pinch of nervousness and anticipation. I think it is because I am getting used to a new character and meeting the cast and crew who I will be with on this long and hard journey". She did not forget to add a message to the audience saying "I am excited about the life my character will share with the audience. I will be happy if the audience will all cry and laugh along with the character".

"All About My Mom" is a cheerful weekend drama where a daughter who thinks "happiness is beyond the walls of this family", a mother who thinks "what do you know about being a mother? Walk in my shoes for a mile", and another mother who confidently thinks "I will be a cool mother-in-law" come together to be a family amongst shenanigans.

With such dramas as "My Husband Got a Family" (2012), "My Daughter Seo-yeong" (2012), and "This Is Family" (2014), KBS's weekend dramas have been dominating the "weekend living room" by providing laughs and tears. Now a KBSs weekend drama is going to show the truth behind the funny and sad conflict between mother and daughter represented by "I do not want to live like you mom" and "wait until you have a daughter like you". The drama will air its first episode on the 15th of August in the timeslot currently occupied by "Blue Bird Nest".

"Eugene starts filming her first drama post pregnancy : "a mixture of a pinch of nervousness and anticipation""
by HanCinema is licensed under a Creative Commons Attribution-Share Alike 3.0 Unported License.
Based on a work from this source