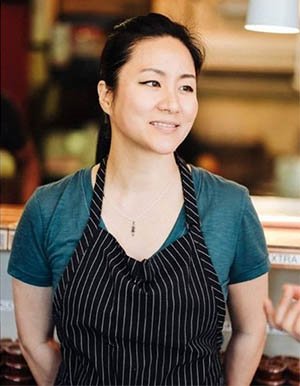 Ex-pop star Lee Ji-yeon's restaurant in the U.S. has been chosen as the best barbecue restaurant in Georgia by monthly magazine Food & Wine.

Under the heading "The Best Barbecue in Every State", the magazine picked Heirloom Market BBQ in Atlanta to represent Georgia. It is run by Lee Ji-yeon, who now goes by the name Chef Ji Ji, and her husband

"When Texas-born Cody Taylor and 1980s K-pop teen idol [Lee Ji-yeon] opened Heirloom Market BBQ a decade ago, the plan was to delve into their wildly different backgrounds to create something Atlanta couldn't help but fall in love with", the magazine wrote.

"Early on, the couple essentially stumbled into creating their Spicy Korean Pork Sandwich, initially made with leftovers, that became one of the city's most iconic sandwiches".

Born to a poor family in Daegu, Lee started out in K-pop in 1987 when she was still in high school and released several hit songs. She moved to the U.S. in 1990 and studied at Le Cordon Bleu College of Culinary Arts in Atlanta, a spin-off of the famous French cooking school.

She was also a semifinalist in the Best Chef Southeast award this year from the James Beard Foundation.

"Ex-K-Pop Star's BBQ Restaurant Named Favorite in U.S."
by HanCinema is licensed under a Creative Commons Attribution-Share Alike 3.0 Unported License.
Based on a work from this source