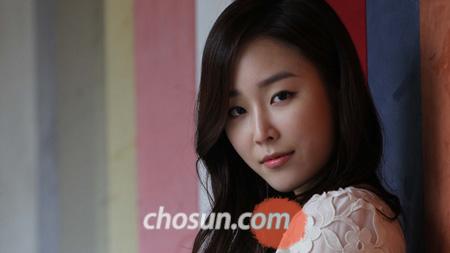 When Seo Hyun-jin made her debut as the lead vocalist of girl group M.I.L.K., she thought she would immediately be catapulted to stardom. However, the girl group soon fell by the wayside due to fierce competition among manufactured bands, which led to one of the members quitting before the outfit completely disbanded in 2003.

But almost a decade later, Seo is back in the spotlight, not as a singer but as an actress. By playing the role of an overly ambitious chef who will go to any length to keep her place in the kitchen in the MBC weekend drama, "Feast of the Gods", Seo has finally captured the attention she has craved for so long.

When the Chosun Ilbo sat down with Seo on Monday for a chat, the singer-turned-actress seemed in good cheer and said she is enjoying the happiest time of her life.

"This is the first time I've played a villainous character", she said. "I try not to surf the Internet these days for fear of seeing all the harsh comments about the character I play, but people around me, including production staff, encourage me and praise my acting".

The drama, which deals with friendships and rivalries between chefs in traditional Korean restaurants, has garnered favorable ratings since it began airing in February.

After M.I.L.K. was dissolved, Seo attended Dongduk Women's University, where she majored in music to keep her dream of a career in singing alive.

When she got a chance to perform in her first musical, "The Sound of Music", in 2005, she saw it as a turning point to begin her acting career. "It was so exciting to immerse myself in the character and get close to the other actors. I thoroughly enjoyed all of the performances", she said.

Seo said she hopes to develop her acting skills to become one of Korea's leading actresses. When asked if she still want to sing on stage, she hesitated for a few seconds. "Keep your eyes peeled", she said. "I'll make my comeback when the time's right and I'm ready".

"Ex-Teen Singer Reinvents Herself as Soap Actress"
by HanCinema is licensed under a Creative Commons Attribution-Share Alike 3.0 Unported License.
Based on a work from this source