[Exclusive] Park Si-hoo case in full detail, speculations of A and B's plot 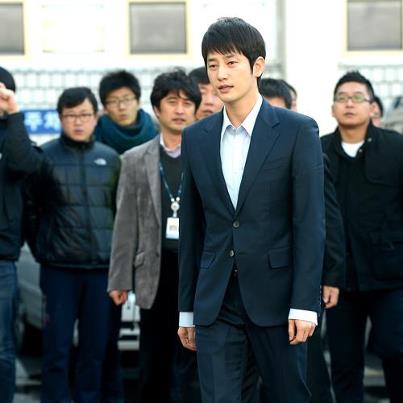 Everything has a background and an objective. The same goes for Park Si-hoo's case. 'A"s rape charge has a reason. If it was unjust, 'A' would be legally punished. If they shared emotions, the story changes. There is an aim for 'A"s actions.

Right now when they are conflicting with each other, the background becomes an important key to this case. 'Dispatch' focused on investigating 'A"s whereabouts after the 15th of February. Contents of the text messages from 'A' to 'B' were obtained and so was the voice recording between the two of them.

Looking at their conversation, 'B' should be in prison. She orders her, "Don't answer your phone", "Don't clean yourself" and such. 'A' talks about compensation. "He owns 300 billion won", "He's not the one anymore" and more.

They also conspired about the media. 'B' said, "You need to make a media report to get more money". Then to a supposed friend, 'C', she said, "We made a report about Park Si-hoo's rape, don't touch us".

There is talk about the mastermind. There were three characters to this case. 'B' actually asked someone for help and delivered messages to 'A'. The text messages prove this fact.

On the 15th of February at 3AM is when 'A' came out of Park Si-hoo's house. Five hours later, she was at the One Stop Center and later at a gynecologist's to have samples of her blood and urine taken for results to prove he raped her. She also finished giving her statement at the Western Police Department as the victim.

From having intercourse to reporting, it all happened in a day. What made her change her mind? Dispatch took a look at her text messages before she went to the help center and before she made a report. It can be seen that she has her attention focused more on money than help. 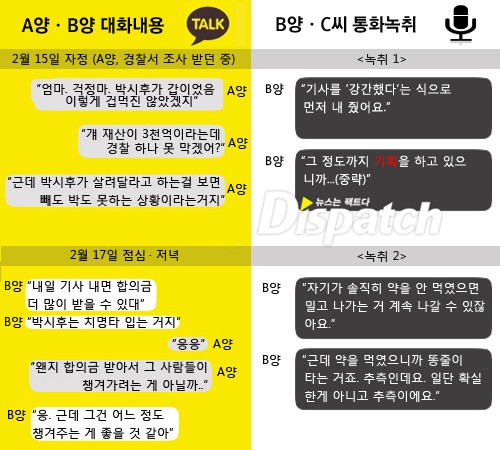 On the day 'it' happened, 'A' comes out of Park Si-hoo's house and heads to the One Stop Center. From Kangnam to Mapo. 'B' was advising her this entire time. 'B' hurried 'A' to go to the police station and 'A' listens to 'B'.

According to the text message Dispatch managed to obtain, 'B' told 'A' to never wash herself and to get her hair, blood and urine tested. 'A' answered, "Yes" and headed to report the rape.

At the same time, 'B' visited a friend. 'C' was having drinks with some business people. 'B' told 'C' that 'A' was raped by Park Si-hoo and 'C' was surprised so he called the previous agency director, 'D'.

'B' delivered Park Si-hoo's agency's response to 'A'. 'A' figured Park was scared and gave her a testimony. She even told her mother, "He's got nothing on me. If it wasn't a problem he wouldn't act the way he is". 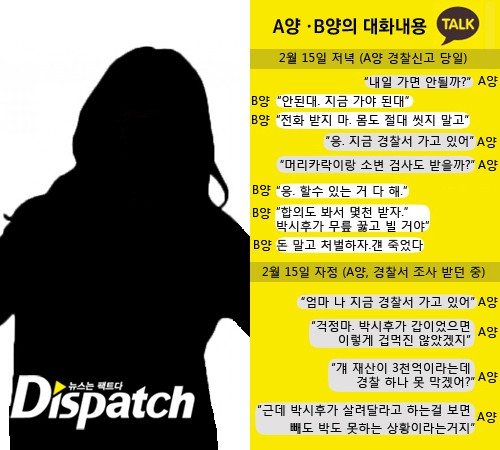 ◆ Who planned the media play?

On the 18th of February, news of Park Si-hoo's rape comes out into the world. This is three days after the report. Considering the fact that February 16th and 17th were weekends, it was known pretty fast. This was also the work of 'A' and 'B'. The text messages show that they groped their way through the media.

Another shocking fact is that media play was just something to increase their compensation. They agreed that the media must be told about this -- one day before the news came out. 'B' says, "If we release it to the press Park Si-hoo will be hit hard and we can get more money".

We can see that the first media release was done by 'B'. Another clear fact is that 'B' has been responding to one particular media. When things became bad for her, 'B' claimed that she was fooled by 'A' but she was actually attacking Park Si-hoo and 'D' at first. 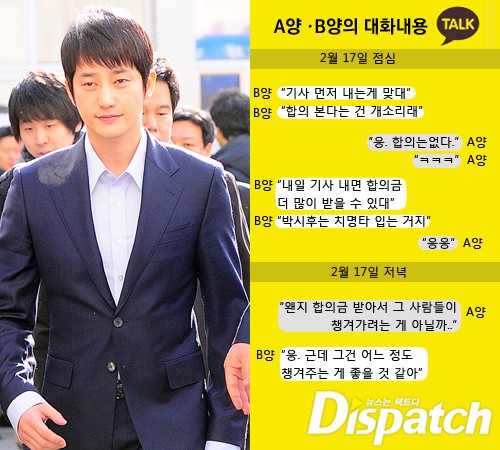 ◆ Is there another mastermind?

They are in their early 20's. From making a police report to media play. Did this really come from them? Dispatch suspected another mastermind during investigation. It's likely because 'B' was getting help from a third person and delivering the messages to 'A'.

For example, 'A' was going to go to the police on the 16th and she asks 'B'. 'B' says, "No, he says you have to go today", sending someone else's opinion. The same goes for media play. "He says you need to make news about it for more money".

Mentions from the mastermind comes once again in the money part. 'A' says, "I hope they don't ask for money when we get our compensation" and 'B' says, "I think it's right to give them some money". This is a commission.

Who is behind all this? 'C' and 'D' have nothing against them. Results show that 'C' and 'D' first spoke with 'B' after 'A' made the police report. 'C' and 'D' send messages to 'A"s father and ask for reason. 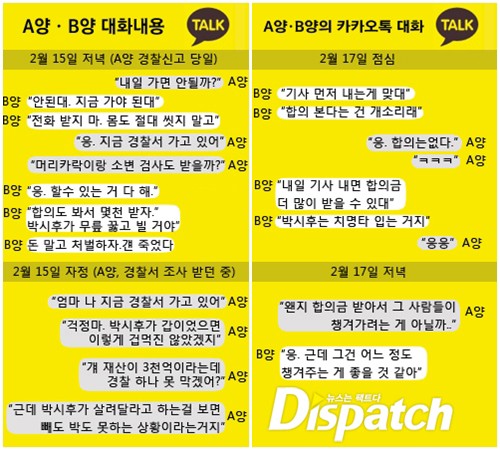 'A', was it something more than punishment?

'A' and 'B' are sure of themselves. They think that the victim's statement is the priority in case of rape. Did they just go ahead with it? It was possible because there were questions about drugs -- 'B' swore that it was propofol and that 'A' was a good drinker who wouldn't pass out like that with just two bottles of alcohol.

'A' told her family about Park's wealth. "He has 300 billion won. He can stop even the police. But seeing that he's asking for forgiveness he's got himself in some big trouble.:

The fact that the conversation revolves around 'money' more than 'punishment' is another reason to suspect her. 'B' asked if they should punish him and not do it for the money once but after that it was all about the money. When tests results for drugs came back negative, 'B' turned away and mention about money was nowhere to be found.

This case is rape. The police put weight on 'force' rather than 'objective'. 'A' keeps on claiming 'unconsciousness' and 'inability to resist' and Park Si-hoo won't be able to avoid quasi-rape. However, moral judgment is different. If there is objective behind 'A' and 'B"s actions, they will be questioned about their sincerity.

"[Exclusive] Park Si-hoo case in full detail, speculations of A and B's plot"
by HanCinema is licensed under a Creative Commons Attribution-Share Alike 3.0 Unported License.
Based on a work from this source