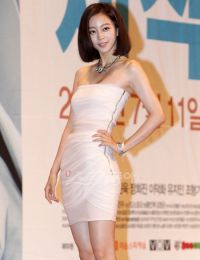 Her lover is a businessman older than her whom she has been seeing with marriage in mind and he has been confirmed to have left with Han Ye-seul on the 15th through Incheon International Airport.

His name was listed on the flight KE0017 along with hers. He also helped her leave the departure hall.

They were also spotted by those passengers who were at the airport at that time. The truth about Han Ye-seul and her boyfriend leaving together spread in social networks like Twitter and some wondered if it was the manager but it wasn't.

Han Ye-seul's management Sidus HQ revealed that no manager left with her until the night of the 16th.

Han Ye-seul's boyfriend has been protecting her side for a while. Even when she bought the apartment she is living in now, he stood forward and helped with the interior the way she liked it.

Someone who knew the boyfriend very well said on the 16th, "He travels back and forth Korean and the States often, so it is very likely that they are staying together in LA".

"[Exlcusive] Bound for LA, Han Ye-seul's lover followed"
by HanCinema is licensed under a Creative Commons Attribution-Share Alike 3.0 Unported License.
Based on a work from this source