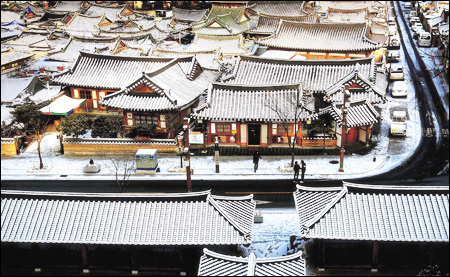 This is the second in a series featuring "must-see routes" for foreign tourists, developed by the Visit Korea Committee. A total of five routes spanning the country will be presented over a three-month period. The series will introduce a high-quality tour biweekly and is in conjunction with the nationwide campaign to promote the "2010-2012 Visit Korea Years''. ― ED.

There are many spots across the country where foreign tourists can see how Koreans lived during the Joseon Kingdom (1392-1910). But there is no place like the famous hanok village, made up of traditional Korean houses, and other historical sites in North Jeolla Province, a three-hour drive from Seoul, to experience Korea's traditional lifestyle and get a taste of unique cuisines. 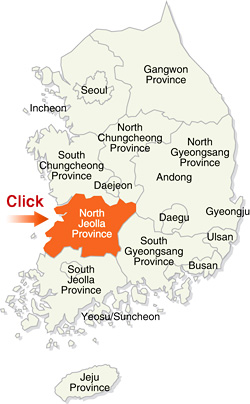 The Jeonju Hanok Village is a must-go destination for foreigners visiting this southwestern part of the country. At first, they will be amazed by a spectacular view of 700 hanok, or traditional Korean houses, and then by a wide range of fun activities they can engage in.

There are also many museums displaying historical artifacts and local specialties, with dozens of restaurants ready to serve visitors hundreds of local delicacies.

Other popular tourist sites nearby the hanok village, including Gyeonggijeon (a shrine worshiping the founder of the Joseon Kingdom), Hyanggyo (Confucian academy) and Jeongdong Catholic Church, are flooded with thousands of visitors every day.

If you venture out of Jeonju, the province's largest city, a whole new world awaits you. The Byeonsan Peninsula, the national park in Buan County, is a beachgoer's paradise. Visitors can also tour nearby Saemangeum Reservoir, created by the world's largest reclamation project, which offers a unique view that cannot be seen anywhere in the world.

If you head south from there and arrive at Gochang County, the nationally-renowned Seonunsa Temple and dozens of ancient dolmen, UNESCO World Natural Heritage Site, are ready to welcome you.

If visitors go northeast from Gochang, they will encounter a rather uniquely-shaped mountain, called Mt. Mai, in Jinan County as its two peaks look like horse's ears that arouse curious responses from onlookers.

"People know North Jeolla Province only for bibimbab and several other traditional dishes. But when you visit this unspoiled land, you will be pleasantly surprised by what it can offer both Korean and non-Korean visitors'', said Han Kyung-ah, executive director of the Visit Korea Committee. "Jeonju Hanok Village and many other sites across the city, which is the birthplace of the Joseon Kingdom, are attractive tourist spots. Above all, tourists can enjoy a wide range of authentic Korean dishes at affordable prices''.

The Year of the Black Dragon is the "Visit North Jeolla Province Year'', Han said, stressing the year 2012 is a perfect time for foreign guests to visit the area and experience Korea's traditional lifestyle.

Jeonju Hanok Village, the landmark of Korean traditional culture, is one of the most popular tourist attractions in Korea. In the well-preserved living traditional village, 700 hanok are home to Jeonju residents today. Visitors can appreciate the beauty of each hanok structure by taking a stroll through narrow alleys. During their journey, they will inevitably discover a number of facilities from which they learn how to make traditional artifacts and how to drink traditional alcohol and tea. There are traditional culture learning centers such as art crafts exhibition halls, master products exhibition centers, hanok living experience centers, traditional alcohol museum, hanji (Korean paper) centers, and herbal medicine experience centers. Visitors can participate in learning about and making traditional art crafts such as fans, while trying out the traditional tea shops and restaurants. Guests can stay overnight in hanok if they seek to experience what it was like to sleep during the Joseon Kingdom.

Gyeonggijeon, historical treasure No. 339, is a shrine worshiping the first king of the Joseon Kingdom, Taejo. The shrine was built by King Taejong in honor of his father. But the wooden structure was burned down in 1597 during the Japanese invasion and was rebuilt in 1614. The shrine holds Taejo's portrait, which was drawn in 1442 when his grandson King Sejong was ruling the kingdom. The present portrait of the regent was redrawn in 1872 by King Gojong. Every year, descendants of the Joseon royal family from across the country hold a memorial service for their ancestors. Two tortoises are installed on the roof of the main building of Gyeonggijeon. Carpenters who completed building the structure put them there, hoping it would last eternally. The tortoise is also known as a preventer of fire as it lives in water. Besides seeing King Taejo's portrait, thousands of tourists visit Gyeonggijeon every year to stroll its well-kept garden. It is particularly beautiful with autumn scenery and a popular filming location for historical dramas and movies. 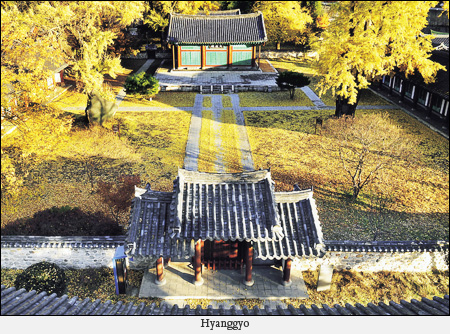 Hyanggyo is a Confucian academy, which nurtured tens of thousands of scholars over the centuries. Many of them went to Seoul and passed exams, becoming civil officials from the Goryeo and Joseon Kingdoms. Jeonju Hyanggyo has become a popular tourist destination after it was used as a main filming location for popular drama "Seonggyungwan Scandal'', which took viewers to Jeonju hundreds years ago. The Confucian school was first built during Goryeo Kingdom and the present structure is said to have been rebuilt in the late 1500s. There are five big and old ginkgo trees in Hyanggyo, with the one in front of the west gate being 400-years-old. The meaning of planting ginkgo trees in Confucian school grounds is for students to become an upright person as the ginkgo trees do not get infested with insects. Ancestral rites are performed, and legend says that if one supplicates a wish with a 250-year old ginkgo taken in front of Ilwok gate, he can pass a state examination. 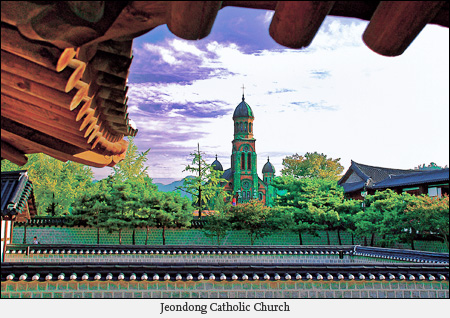 Jeondong Catholic Church, the site of the first Korean martyrs, is located in the entrance of the hanok village. The church is established in the exact place where the first martyrs Yun Ji-chung and Gwan Sang-yeon were executed in 1791. Jeondong Catholic Church, built from 1907 to 1914, is the cradle of faith that preserving martyrdom place. The church's cornerstone was erected with the stones from the ramparts of Pungnam gate, the south gate to Jeonju, after it was destroyed. As the first Western style building in Jeolla Province with Romanesque style, it became an attractive place with the cornerstones and stained glass with colors and paintings of martyrs Kwon Sang-yeon, Yun Ji-chung and Yu Jung-cheol. These days, the church has become a popular place for wedding ceremonies.

Makgeolli Village is where visitors can enjoy drinking traditional Korean rice wine in fun settings along with delicious side dishes at affordable prices. Paying for only one kettle of makgeolli fills the table to the full and special side dishes are available upon further ordering one kettle. There are over 250 makgeolli houses in Jeonju. Jeonju makgoelli is cited as one of the three most-known Korean rice wines, and they are as equally famous as the Jeonju "bibimbap", "hanjeongsik" (Korean Table d'hote) and "kongnamul-gukbap".

Seonunsa Temple located in Gochang County is famous for its beautiful trails. While walking on the trail from the foot of Mt. Seonun all the way up to the temple, visitors can appreciate a spectacular view of the mountain. In particular, thousands of people visit the mountain in the autumn when the leaves of the numerous maple trees turn red or yellow. 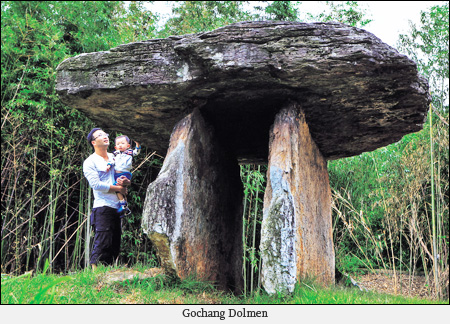 Built during the early Joseon Kingdom, Gochang-eup Fortress, 1,684 meters in circumference, is another popular tourist spot. There are engraved letters on the fortress wall, by which some people guess that workers were mobilized from various areas in Jeolla Province and construction was completed in 1453. Fortress hiking has been handed down and preserved as a unique folk custom. The legend states that if you walk around the fortress with a stone on your head once, all diseases will be cured; if you walk around three times, you will go to paradise. The best days for hiking there are in March. The dolmens are another must-see. The Gochang Dolmen Site is the largest and most diverse group in Korea, centered on the village of Maesan. Most of them are located at altitudes of 15 to 50 meters along the southern foot of the hills. A total of 442 dolmens have been recorded, of various types, based on the shape of the capstone. Those interested can learn more about this UNESCO World Natural Heritage by visiting the nearby Gochang Dolmen Museum. 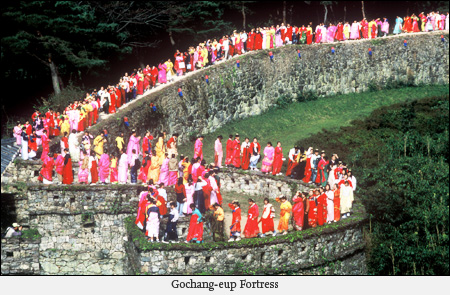 The Byeonsan Peninsula in Buan County is a popular summer vacation destination for its beautiful beaches, while Mt. Naejang located in Jeongeup is the most famous mountain autumn foliage. Mt. Mai in Jinan County is another popular spot for visitors for its uniquely-shaped two peaks, which look like horse's ears.

Jeonju hanjeongsik (Korean traditional table d'hote) is the food all visitors to North Jeolla Province should try. Hanjeongsik refers to a formal table setting at Korean restaurants and Jeonju hanjeongsik, which is widely regarded as a masterpiece of local cuisines, is even more filling to your eyes and stomach. During the Chosun Kingdom, Jeonju hanjeongsik was enjoyed only by "yangban", or the upper social class, and served only on brassware. The menu is normally is comprised of 15 to 16 side dishes, including the eight to 10 main ones and three to four special dishes. If you want all kinds of delicious dishes on one table, Jeonju hanjeongsik is the one for you. These are some of restaurants that serve genuine hanjeongsik; Baekbeonjip (063-286-0100), Jeollahoegwan (063-228-3033), Songjeongwon (063-283-7663), Hanbyeongnru (063-280-7082). 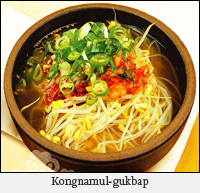 Jeonju is also well-known for kongnamul-gukbap, or bean sprout soup, which is popular with heavy drinkers across the country. It is a rice-based dish cooked with bean sprouts and condiments in an earthen pot, called "ttukbaegi". The dish is boiled in earthenware by putting a variety of spices on rice and mixing them with soybean sprouts and its unique flavor and refreshing taste has been loved by habitual drinkers as one of main Jeonju dishes. It is a must-taste in this ancient city. Jeonju's weather conditions and water quality are particularly suitable for cultivating bean sprouts. For kongnamul-gukbap, visitors can go to Sambaekjip (063-284-2227), Hanilgwan (063-226-1569) and Wengi Kongnamul (063-287-6979), among many more famous restaurants that serve the dish. 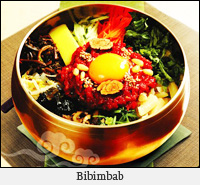 Bibimbab, one of the Joseon Kingdom's top three dishes together with Pyongyang "naengmyeon" and Gaesung "tangban", is the most famous traditional dish in Jeonju. It is a mix of steamed rice mixed with assorted vegetables and chili pepper paste. Bibimbab is the first dish that foreign visitors seek once they arrive at the city. Kongnamul cultivated in good quality water and fresh raw meat makes Jeonju bibimbab delicious and special. Nowadays, you can enjoy it even on trains or planes. Those seeking to eat genuine Jeonju bibimbab are strongly recommended to check out these restaurants; Gajokhoegwan (063-284-2884), Gogung (063-251-3211), Hankookkwan (063-272-9229). 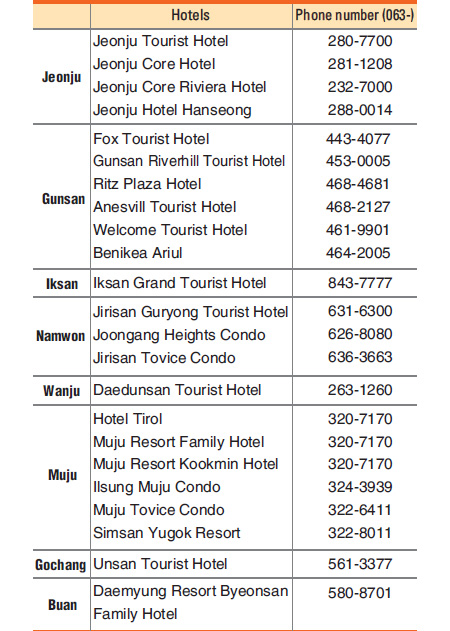 "Experience Korean lifestyle in North Jeolla "
by HanCinema is licensed under a Creative Commons Attribution-Share Alike 3.0 Unported License.
Based on a work from this source