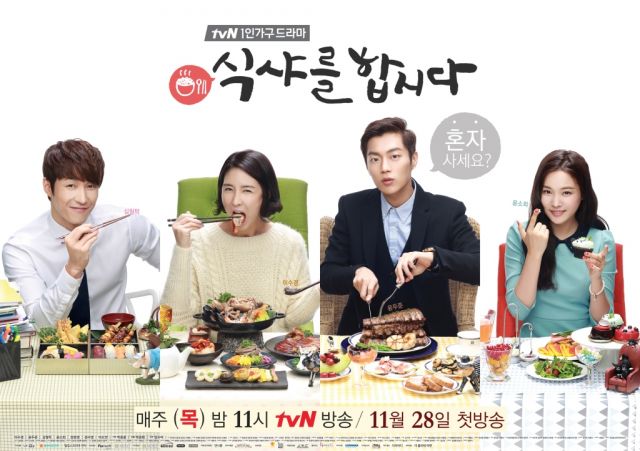 - Connecting with a new generation of viewers, show has ranked as one of nation's top two cable programs among 20-49 year olds in each of the 11 weeks it has aired to-date
- Show has also propelled the "Muk-bang" (eating scene) TV trend in Korea where viewers, inspired by scenes of characters enjoying delicious meals, hunt down these foods in real life

Seoul, Korea (February 13, 2014) - Exploring the isolation of modern Korean society and food as an important medium to connect, CJ E&M's [http://en.cjenm.com] recent drama "Let's Eat", starring actress Lee Soo-kyung and Yoon Doo-joon from K-Pop group BEAST, has been a hit with a new generation of Korean viewers. According to Nielson, the drama has ranked as one of the nation's top two cable shows among 20-49 year olds in each of the 11 weeks it has aired to-date. The show has also propelled the "Muk-bang" (eating scene) TV trend in Korea inspiring a food craze as viewers passionately watch and hunt down the foods they see on episodes.

Connecting with a New Generation of Korean Viewers
"Let's Eat" is a romantic comedy of a 33-year-old divorced woman who loves to browse her favorite foods on the blog site ""Let's Eat"" to relieve stress from work. Searching for good places to eat, she often struggles to find a companion to enjoy the journey with her. Getting to know her co-workers and neighbors, mostly individuals living alone in studio apartments, she gradually learns how to start a new relationship again.

The show highlights the trend of singles living alone in Korea and the isolation they face including going to restaurants alone. In a country where the traditional and modern are intermingled, many Korean restaurants do not serve single portions. However, with the rise of one-person households and increased social isolation, food becomes an important medium to connect with others. Eating together, people find comfort in the loneliness and insecurity of urban city life.

The show has inspired such a food craze that following each episode of "Let's Eat", the foods highlighted in a particular show have consistently ranked as one of the top-searched keywords on Korean internet portals. There have also been a flood of requests from viewers seeking the location of restaurants shown in the drama, as well as high interest from fans abroad visiting the show's official website to view eating scene clips. To further engage with "Let's Eat" fans, CJ E&M has organized the "Social Dining" program where strangers meet on the show's official webpage and arrange to explore restaurants as a group and share thoughts about the drama.

"What makes "Let's Eat" work is that it draws on themes of modern isolation and loneliness, juxtaposed with the traditional as symbolized by delicious Korean foods, that a younger generation of viewers can really connect and relate to", said Park Jun-hwa, Chief Producer of "Let's Eat". "At CJ E&M, we are actively experimenting and pursuing creative new approaches for our programs which are not only winning a wide following, but also redefining the Korean drama genre".