"Faith" Kim Hee-sun runs around the ancient times with heels 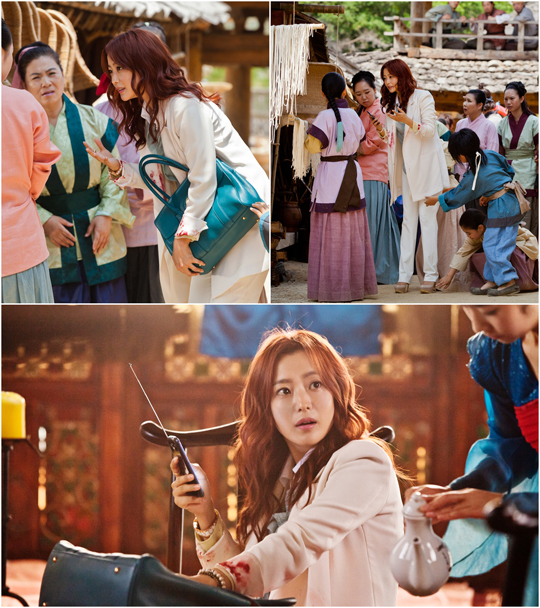 Kim Hee-sun walked around an ancient neighborhood in heels.

Kim Hee-sun from the new SBS drama "Faith" traveled through time and strode the streets of the Koryo times.

In a still cut, she is walking around a street wearing the modern day outfit while people look at her with interest and makes her look like "Alice in Wonderland".

Despite the situation where she is brought here suddenly, she didn't mind the looks she was getting from the people and walked around in her heels, showing the personality of a bold person.

The blood she has on her clothes and the way she is holding up her phone in various directions bring out curiosity in what will happen in the future episodes.

Kim Hee-sun said, "I am enjoying the making of the drama as everyone including the producer and the cast are getting along so well. I play a character who isn't weak or back down in sudden situations".

"Faith" is produced by Kim Jong-hak from "Sandglass" and "The Legend" and written by Song Ji-na. Kim Hee-sun takes on the role of Yoo Eun-soo, a modern day vet and creates romance with the ancient warrior Choi Yeong (Lee Min-ho).

Meanwhile, this romance fantasy drama will be aired on the 13th of August after "THE CHASER - Drama".

""Faith" Kim Hee-sun runs around the ancient times with heels"
by HanCinema is licensed under a Creative Commons Attribution-Share Alike 3.0 Unported License.
Based on a work from this source