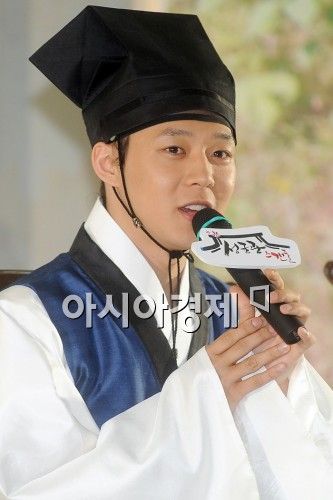 TVXQ singer Park Yoo-chun has been caught up in an assault case where his manager allegedly used physical and verbal abuse to an underage female fan.

On July 26, one netizen posted a comment on an online bulletin board, claiming that her younger sibling had been slapped on the cheek and spoken harsh words to by Park Yoo-chun's manager at a restaurant.

The netizen also said that she has footage from the closed circuit TV from the restaurant and that she has no intention of settling the case out of court.

However, a source close to Park Yoo-chun denied the claims and told a slightly different story.

"Park Yoo-chun and his manager were eating but the other person kept looking over and taking pictures... So he [the manager] told the person, 'We can't eat if you keep looking' but she did not stop", the source told Asia Economic Daily over the phone.

He explained that when the manager kept dissuading the high-schooler from taking pictures, the young fan got up and started cursing, which angered the manager.

"The manager only tapped her on the shoulder but she is claiming that she was slapped on the cheek", the source added. "We checked the video and there is no evidence that he slapped her cheek".

A police officer at West Hwaseong Police Station who is handling the case said that he has met with relevant parties and is "currently looking into the exact account of the incident".

Park Yoo-chun, whose real name is Park Yoochun, debuted in 2004 as part of five-member boy band TVXQ. The group became one of the most successful K-pop acts in the country and throughout Asia, selling numerous albums and setting the Guinness record for having the largest official fan club in the world.

Despite their phenomenal success, TVXQ announced that they will no longer be working as a group in Korea nor Japan and that the members will go their separate ways to pursue individual careers.

The break-up of the band started last July due to a legal dispute between three of its members -- Xiah Junsu, Hero Jaejoong and Park Yoo-chun -- and major talenthouse SM Entertainment over their 13-year exclusive contract. The trio have since formed a new group under Japanese management agency Avex.

Micky, who had previously appeared in several television shows including popular sitcom "Nonstop - Season 6" (MBC, 2006), will be making his official acting debut in upcoming TV series "Sungkyunkwan Scandal", set to air in September.