Fans gear up to watch shooting of `Avengers 2 in Seoul 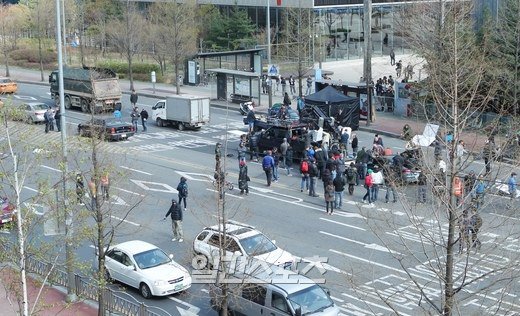 I am a big fan of Avengers. I will have to carry my DSLR camera with high zooming function with me to be able to see actors and actresses from a distance.

Park Seong-hoon, 29, an office worker, watched recently the movie Captain America: The Winter Solider. As scheduled filming in Seoul of Avengers: Age of Ultron (Avengers 2), featuring Captain America, the main character of the former, is drawing near, Park has high expectations.

With its first filming location in Mapo Bridge on Sunday, the Hollywood movie Avengers 2 will be filmed at Sebit Dungdung-seom island, Gangnam-daero street and other sites after blocking traffic for 15 days through April 14. It is unprecedented that traffic is banned for filming of a movie for such long hours in Seouls city center. With ample assistance from the Seoul metropolitan government and Seoul Metropolitan Police Agency and mounting expectations for high profile actors` visit to Korea, a flurry of parody videos integrating images from the previous episode of Avengers with background scenes in Seoul have been generated and posted on the Internet.

People will watch filming process while enjoying coffee in Seoul. Naturally, business will boom. Kim Soo-gyeong, 35, chief of a donut franchise store near Gangnam Station in Seoul, expects her shops giant front show window will be helpful to business when filming will be made on Gangnam-daero on Friday. Stores that sell light food menus also forecast "business boom during filming". We expect that sandwiches will sell like hot cakes due to filming staff and patrons. We have high expectations, said Lee Hyeon-hee, staff at a sandwich shop near DMC World Cup in Mapo district, where filming is scheduled for three days in April.

It is noteworthy that Gangnam-daero is expected to see massive crowds of citizens during filming thanks to easy traffic access. Police plan to block lanes on Gangnam-daero from 4:30 a.m. to 12:00 noon on Sunday next week, and check pedestrian traffic as well according to filming situations. Police will open pedestrian paths when filming is paused, and block them when filming resumes and safety risks are added. People who are considering viewing filming scenes are poised to flock to cafes and restaurants as their point of observing. I have been waiting for filming in Seoul as if I am waiting for World Cup soccer finals, said Kim Ji-hyeong, 26. I will secure a seat with the best view at a 24-hour caf near Gangnam Station from 6 a.m. on next Sunday.

However, critics raise concern that traffic ban could cause inconvenience to citizens, and interfere with business of certain merchants. Kim Hyeon-hee, 54, owner of a convenient store on Gangnam-daero, expressed concern, saying, Early in the morning on Sunday is peak time when patrons come to my store upon leaving bars en masse, and if police block the main street, we will see fewer patrons coming. Residents in Sangam-dong, where traffic ban will be imposed on weekdays, not on weekend unlike in other areas, expressed concern over commuting to and from office and school. Cha Ho-cheol, 62, who uses bus to commute, expressed discontent, saying, Since there`s no subway service provided in this area, traffic ban shouldn`t be imposed during rush hours. The Seoul metropolitan government will deploy ad-hoc bus lines for 72 bus routes linking to filming sites, and install temporary bus stops for citizens.