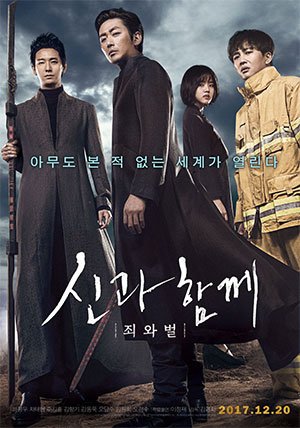 "Along With the Gods: The Two Worlds", directed by Kim Yong-hwa, attracted 4.61 million viewers until Sunday, just six days after its release.

The pace is similar to the two of the biggest box-office hits in the history of Korean cinema, "The Admiral: Roaring Currents" in 2014 and "Train to Busan" in 2016.

On Christmas Eve alone, 1.27 million tickets were sold for the fantasy extravaganza, a rare feat for a movie in the traditionally slow winter months.

Other films released around this time did not even get close to 1 million viewers, except for crime caper "Master" starring Lee Byung-hun with 930,000 last year.

"Ode to My Father", the most successful winter release to date, took 12 days to hit the 4 million mark in 2014.

Why is the movie so successful? Koreans love a family drama, and the computer graphics are spectacular.

"Having the power to move viewers is a great virtue for commercial films", says film critic Jeon Chan-il. "I want to praise the way the 'cold' digital CGI and 'warm' analogue sentiments are so well mixed in the movie".

The fantasy aspect appeals to young people, the family theme to older ones.

Movie market analyst Kim Hyung-ho says "Along With the Gods: The Two Worlds" will easily break the 10 million viewer mark.

"Fantasy Spectacle Captures Christmas Box Office"
by HanCinema is licensed under a Creative Commons Attribution-Share Alike 3.0 Unported License.
Based on a work from this source