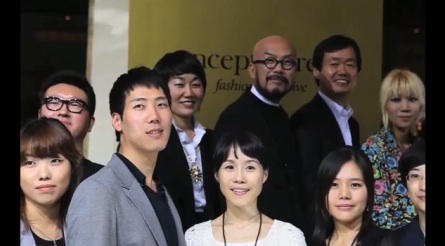 Lady Gaga. Beyonce. Rihanna. Beth Ditto. Just a few of the fashion forward celebrities that turn to one particular designer when seeking an over the top look that accentuates the female form beautifully.

Korean-born Lee Sang-bong is that designer. His collections are not only coveted by celebrities, but they are also utilized frequently in international editorial spreads. Magazines such as Collezioni, Elle, Korean Vogue, VIBE, and Spanish Glamour seek out his avant-garde pieces for shoots, as they are sure to make a statement every season. His diverse inspirations stem from Bauhaus Architecture, Korean folk painting, and French elegance. Lee has clearly taken both the Korean and international fashion world by storm with his imaginative looks that transcend time and place.

First showcasing at Seoul Fashion Week in 1993, the designer quickly gained a loyal Korean following with his bold designs that easily stood out from the rest. Thanks to his brilliant, standalone designs he was given the honor of "Designer of the Year" by the Seoul mayor. From there, things began to fall into place for the creative mind and Paris was the next logical step.

Debuting his ready-to-wear collection to the Paris market in 2002 convinced Lee to base his company in the City of Lights, in addition to his home base of Seoul. The European market quickly took to the Korean designers geometric, sculptural designs. Each garment is a work of art and became high regarded in many fashion circles. Parisian actresses such as Juliette Binoche quickly became a fan of Lee's theatrical and poetic garments.

Lee is now regarded as the "McQueen of Korea" thanks to his marriage of volume, elegance and innovation. He has become an international press darling with features in W Magazine, Le Figaro, the New York Times, Vogue, Vanity Fair, and Telegraph. Internationally recognized Korean companies like LG and Samsung have sought out Lee's creative input and talents for limited edition products. From a sleek LG phone to an authentic Asian poker set to a sculptural tea and saki set, Lee has left his mark on more than just the fashion world.

But what is refreshing about Lee is his belief in fashion as a wearable art form. No design should be too artistic as to not be wearable, yet art should never be sacrificed in his clothing either. What is the result? A collection that marries both art and function.

As one of the most notable people in Korea, Lee continues to seek growth in the international markets, particularly the United States. And he did just that at the Concept Korea Fashion Presentation at Mercedes Benz Fashion Week in New York City Sept. 9. Lee was one of five designers selected by the Korean government to participate in the 4th season of this exclusive fashion show. The presentation is a way for the international fashion world to see the power of Korean design at the best venue possible, New York Fashion Week.

All were in awe of Lee's Spring/Summer 2012 Technicolor collection. The collection was inspired by "dancheong", a traditional Korean art form of painted colorful patterns on wooden objects. The patterns permeated throughout the collection, and even the blocks the models were posed on reflected these colorful, kaleidoscopic patterns. The unique shapes and techniques characteristic of Lee were apparent in his SS12 collection. From laser cut sleeves and bodices, to accordion pleated A-line skirts, to leather-like skirts that rippled around the female form, Lee truly captivated the audience with his sculptural designs.

The most awe-inspiring aspect of his new collection was the color palette. Black and beige came to life interspersed with magenta, blood orange, sky blue, and kelly green. They hues ranged from matte to an iridescent shimmer. One structural top in particular stood out from the rest of the collection as it shifted shades depending upon where you were standing. From lime green, to cobalt blue, to sunshine yellow, the top with its laser cut sleeves was by far a favorite piece in his already outstanding collection.

Even the accessories reflected the dancheong properties of bold color, movement, and light. The patterned tights snaked around the models' legs in color bursts that coincided with each look. The heels strapped and wrapped around the models' ankles and feet, some in buttery crème leather and some in reflective green hues. The clutches complimented the ensembles with their clean lines and sophisticated shapes. And lastly, the hair was executed in an asymmetric, swirled topknot, alluding to the playful element that is an underlying theme in Lee's designs.

After seeing designers become a dime a dozen, it is refreshing to experience a true fashion designer that has a clear vision and has achieved longevity. Lee is a designer that understands how a garment should be sewn and then placed onto a woman's body. A garment that moves in a way that reflects beauty, poetry, and artistry is a rarity nowadays with fast fashion retailers becoming more of the "norm" than a well-made skirt, dress, or blouse. Those that attended the Concept Korea Fashion Presentation "ooohed and ahhed" over Lee's creations, and the general consensus appeared that he was the fashion favorite of the night.

At the end of the Concept Korea presentation, Lee appeared enthusiastic and willing to join the four other designers for photo ops, followed by mixing and mingling with the fashion-loving attendees. His jovial demeanor is just another reason why Lee and his collections are not to be forgotten, but instead a person and an art form to be commemorated season after season.

"Fashion Sculpturist: Legacy of Lee Sang-bong"
by HanCinema is licensed under a Creative Commons Attribution-Share Alike 3.0 Unported License.
Based on a work from this source