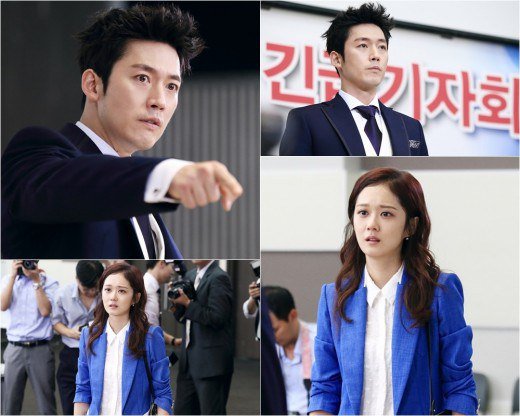 Stills of Jang Hyuk having a press conference and Jang Nara with tears in her eyes, were released.

The pictures show Jang Hyuk surprised about something in the middle of the conference and becoming emotional.

Jang Nara is also there, with pictures being taken by the reporters. She looks like she's ready to burst out into tears and sorrowful. What is going on between the two?

This scene was taken in KINTEX, Ilsan. Lee Gun is offering his resignation which will be a major turning point for Gun and Mi-yeong.

The production of "Fated to Love You" claimed, "As the story unfolds the relationship between the two of them will speed things up".

Meanwhile, with four more episodes to go, Mi-yeong recently found out that 'Yeong-ja' was actually Lee Gun and who knows what will happen to them in the rest of the drama.

""Fated To Love You" preview: Jang Hyuk holds a press conference"
by HanCinema is licensed under a Creative Commons Attribution-Share Alike 3.0 Unported License.
Based on a work from this source