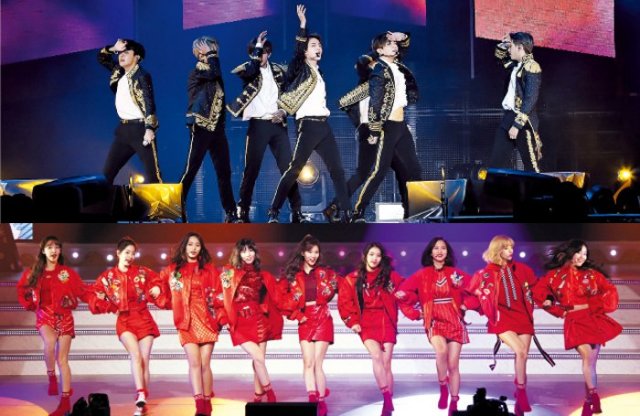 This year marks the 20th anniversary of Korea opening up its market to Japanese pop culture. The government first started to allow imports of Japanese movies and comics in October 1998, and it took until 2006 for Japanese TV programs, music albums, computer games and animated films to reach the country.

At the time there were concerns that Korea would become swamped with Japanese culture. But twenty years later, the exact opposite is taking place.

Culture critic Jung Duk-hyun said, "When the Beatles became a sensation in the U.S. in the 1960s, they called it the 'British invasion.' This sense of crisis is growing in Japan due to the increasing influence of K-pop, with Bangtan Boys, also known as BTS, being the Beatles of the 21st century".

This trend is most evident in the music industry. Exports of Korean songs to Japan were worth US$277.3 million in 2016. That is 100 times more than the $2.9 million worth of Japanese songs imported by Korea during the same period.

Korea is also far ahead of Japan when it comes to computer games. Exports of Korean computer games to Japan have reached $600 million, which is more than 10 times the size of Japanese computer game imports of $51.6 million. The same goes for TV program, whose exports to Japan are around 12 times larger than imports.

A symbolic case is the K-pop girl group Iz One, which debuted just this month. Three out of the group's 12 members come from AKB48 and other Japanese girl bands. They beat tough competition with Korean candidates in a televised audition on music channel Mnet to win a spot, going through a grueling process and being strictly criticized by Korean choreographers for their dancing skills.

Kim  Yong-beom, a producer at CJ E&M, said, "If you look back on how we used to copy the Japanese system of training idol stars, something almost unimaginable has happened".

Korea's strategy of aggressively responding to Japanese pop culture imports from the beginning paid off. Japan's music industry is scaled at $5.7 billion, second in the world after the U.S. ($19.6 billion), and six times larger than Korea's ($945 million).

Adding to the explosive popularity of K-pop around the world was a tectonic shift in how people are exposed to music through online channels like YouTube. A staffer at SM Entertainment said, "The Internet has helped remove hurdles to promotion and boost success because we can market new albums simultaneously around the world in real time".

K-pop groups no longer have to rely on Japanese production companies or broadcasters to reach consumers there. Instead, Japanese fans upload new music videos by BTS, Wanna One and TWICE on the Internet complete with Japanese subtitles and spread them via social media.

In spite of heightened animosity between the countries at the official level and an offensive t-shirt one BTS member was wearing, the band drew 100,000 fans at a recent concert in Tokyo.

Political conflict between Korea and Japan may have an influence on bilateral exchanges, but experts say the two countries share an optimum set of conditions ensuring that both sides win when it comes to pop culture. Culture critic Ha Jae-keun said, "Japan accounts for half of all K-pop profits and still has huge potential for growth. And for Japan, the Korean market can be used as a test bed for the global market".

"Fears of Japanese Pop Culture Invasion Proved Unfounded"
by HanCinema is licensed under a Creative Commons Attribution-Share Alike 3.0 Unported License.
Based on a work from this source