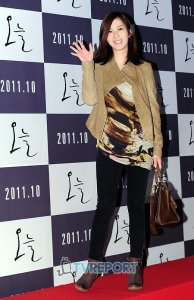 Actress Song Yoon-ah has been chosen as the country's first ever sole MC for a major domestic film award.

She will be the sole host of the sixth Korea Film Awards to be held Dec. 1 at the Sejong Center for the Performing Arts.

The award's secretariat said, "Actor Ahn Sung-ki, who hosted the event from its second year, turned down the offer due to his filming schedule [for the film 'My New Partner']. We thought a sole female host would be attractive in its own way so we made the offer to Song and she accepted it after careful thought".

No major Korean film awards, including the Blue Dragon, Daejong and the Korea Film awards, has been hosted solely by a woman.

A sole host can be a burdensome position for a two hour long live ceremony that carries many risks such as unpredictable timing and long acceptance speeches. But since Song has hosted the show with An for the past four years, the award organizers trust her experience.