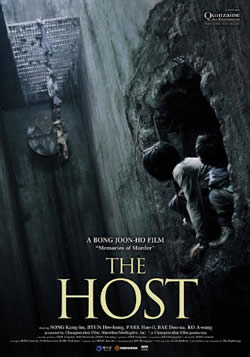 The film "The Host" directed by Bong Joon-ho has made the headlines as it is likely to win the highest-ever export amount in the history of Korean filmdom.

"The Host" received a favorable response as soon as it was shown at the 59th Cannes International Film Festival. According to an official from the film production agency ShowBox, "The Host" will be exported for $2.3 million to about ten countries in the Americas, Europe and Asia, including the U.S., Britain, Brazil and Argentina.

Simply based on the film's script, the agency has already signed an export contract with HappyNet Pictures of Japan for $4.7 million (including $3.2 million for the export of the film and $1.2 million for investment). Even before it is released, "The Host" will likely earn a total amount of $7 million in exports to foreign countries. The export amount of this film to other countries except Japan is the highest in the history of Korean filmdom.

In addition, as the agency has concluded contracts regarding direct delivery of the film with China, Singapore and Malaysia, the total export amount will likely further exceed $7 million. Notably, the film will likely fetch the highest export price in the U.S. and Britain, the countries that have so far been unenthusiastic about the import of Korean films.

An official from CineClickAsia, the distribution agency for "The Host" in the overseas market, recounted how enthusiastic foreign buyers were about the film, saying, "Two previews of the film held at the Film Market of the Cannes Film Festival were crowded with would-be buyers. Many other foreigners, however, were not able to see the film although they had waited for an hour. So an additional preview was hastily arranged for them to see the film at their request".

"The Host", which portrays a story about an ordinary family struggling against a monster, will be released on July 27.