Filmmaking is not about money: Kim Ki-duk 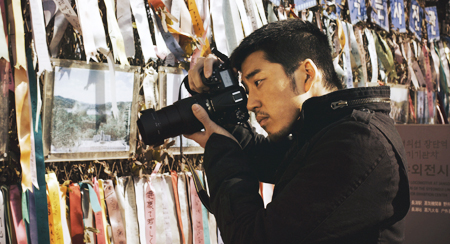 Director Kim Ki-duk has returned to Korean cinema with an inter-Korean story that he penned and produced. "Poongsan", directed by his protege Juhn Jai-hong, tries to prove that filmmaking is not about the size of the budget.

And it sure does show that near-impossible projects can actually go through.

"I think Korea's movie industry is just a gambling site these days. I often wonder if Korea can ever make new, revolutionary movies", Kim said in a statement released last week by the film's distribution company Next Entertainment World (NEW).

""Poongsan" will exhibit the power of passion for cinema by going beyond the realm of films that were merely about large investments. "Poongsan" is the start".

Jeon, who made his directorial debut with "Beautiful", also written and produced by Kim, said the project was made "purely with passion".

"I wanted to show that it is possible to make a film with passion rather than money", Jeon told reporters Monday, following a press preview at CGV Theater Wangsimni.

He said he dived into the project without a second thought after receiving the scenario from the elder director last fall.

"When Kim Ki-duk gave me the scenario, Kim Ki-duk Film had nothing. It had no budget; it didn't even have an office.

"But when he asked me to direct, I said of course. I was worried whether the two actors would agree to take part in such a project, but they gladly said yes".

"The film had great intentions... I decided to star in it because I believed it would be a meaningful project", said popular singer-turned-actor Yoon Kye-sang, who plays the lead role.

Yoon appears as a mysterious messenger who crosses the demarcation line between the two Koreas, delivering letters and cherished heirlooms between separated families in Seoul and Pyongyang.

One day he is commissioned with the task of transporting the lover (Kim Gyu-ri) of a high-ranking North Korean official who escaped to the South. Yet things take an unexpected turn when the deliveryman falls for the young woman.

(Kim Gyu-ri said the 25 takes actually felt like 50, and that some of the sessions lasted up to 30 hours.

Yet the intensity of the filmmaking began in the pre-production process. The actress, who has appeared in films such as the Cannes-winning Hong Sang-soo drama "Ha Ha Ha", was cast 13 days before the production began.

"I wanted to be part of the film but I was taking part in a one-act play. But I decided to challenge the impossible. When I finished the theater piece, I had only two days to perfect the Pyongyang accent... I have many regrets because I could have done a better job had I had more time", she said.

Yoon on the other hand did not have to worry about lines for his taciturn character.

"At first I was glad I didn't have any lines and was looking forward to pulling off different facial expressions. But it was extremely difficult, and I was worried whether my expressions were becoming monotonous or whether I was delivering the emotions each moment", he said.

The director said that Yoon's character was a symbol for reunification - having him speak a specific Korean accent would give him a sense of belonging to one of the two Koreas.

"The film is essentially about reunification, something that any Korean would want", he said.

"But as much as it's a somber subject, I wanted to keep the film itself touching yet entertaining, something that anyone can enjoy".

"I wasn't even sure if the film would ever be released, so this is very overwhelming", said actress Kim.

"Poongsan" opens in theaters on June 23. Distributed by NEW, it is rated 18 and over.

"Filmmaking is not about money: Kim Ki-duk"
by HanCinema is licensed under a Creative Commons Attribution-Share Alike 3.0 Unported License.
Based on a work from this source