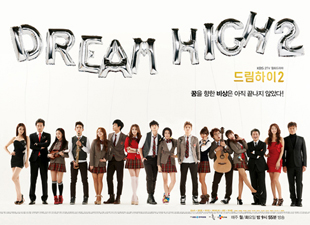 After months of speculation, the finalized cast list of the highly-anticipated drama "Dream High 2" was released on January 15th.

The teachers of the school will be After School's Kahi, Kim Jung-tae, Kwon Hae-hyo, Choi Yeo-jin, and returning actor Park Jin-young.

New characters were also hinted at. Yoo So-young will be playing Park Soon-dong while Kim Jisoo will take on the role of Park Hong-joo. Soon-dong will be a dorky girl who believes she has the power to talk with ghosts while Hong-joo will be an all-around perfect and poetic character.

Ailee will play Ailee, Jinyoung will act as Jung Wi-bong, and Jung Yeon-joo as Yi-seul. The character of Wi-bong will be a saxophonist who's also a back-up dancer for JB. Yi-seul will be the daughter of actor Kim Jung-tae, who will play Oz Entertainment's president and head of Kirin Arts High School.

As for the teachers, Park Jin-young will reclaim his popular role as Yang Jin-man. Kwon Hae-hyo will play Joo Jung-wan, Choi Yeo-jin will play vocal instructor Kim Tae-yeon, and Kahi will be a dance teacher named Hyun Ji-soo.

"Dream High 2" will start airing on KBS2TV on January 30th.

"Final Cast of "Dream High Season 2 Revealed""
by HanCinema is licensed under a Creative Commons Attribution-Share Alike 3.0 Unported License.
Based on a work from this source