Find The Hidden Jokes and Puns In Korean Dramas 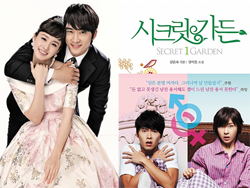 These days, there's more to drama watching then drooling over the good looking characters and getting immersed into the intricate plots. There's now the fun of looking for the hidden messages or puns that the writers and directors are throwing into the mix. Drama viewers have been enjoying the art of deciphering these hidden codes. All in all, it's been creating a closer relationship between the viewers and the creative minds behind each project: directors, writers, producers, and of course the actors.

For example, in the new drama starring Kim Tae-hee and Song Seung-heon called "My Princess", Kim's character's mother runs a vacation home rental service. The reservation list shown on the show was made up of the names Lee Byeong-hyeon, Kim Rae-won, and Yang Dong-geun. The three names are coincidentally strikingly similar to the three male actors that Kim acted together with in the past: Lee Byung-hun (drama "IRIS"), Kim Rae-won (drama "Love Story in Harvard"), and Yang Dong-geun (movie "Grand Prix").

In the drama "Secret Garden" starring Ha Ji-won and Hyun Bin, there was another subtle joke slipped into the story. When the camera flashed onto Ha's character, Gil Ri-am's, resume, viewers saw her name spelt with the corresponding Chinese characters. The character for "ri" stood for "the removal of clothes" and the one for "am" stood for "the thought of". Put that together, Ha's character's name literally means "to think about taking off clothes". "Secret Garden" writers took the joke further by adding a line where Hyun Bin's character asks Gil Ra-im, "What on earth do you think about that makes your hair grow so fast". This is in line with the belief that thinking of sexual or racy thoughts causes one's hair to grow faster.

Another amusing quirk was that the Caucasian actor playing Gil Ra-im's director, Ryan Jackson, in "Secret Garden" was the same actor who was seen taking a picture with Kim Tae-hee's character in "My Princess". Drama viewers commented in jest, "I'm disappointed in Director Jackson. You just blew Ra-im off after five minutes saying you were busy, but you went to take pictures with Kim Tae-hee"

Another example of an unexpected laugh given through "Secret Garden" revolved around the actors Hyun Bin and Yoon Sang-hyun. Yoon's character had a list of people that he needed to apologize to for behaving rudely to in the past. The name Kim Tae-pyeong was included on the list which just so happens to be Hyun Bin's real name. Also, there was a line when Hyun Bin's character asks Yoon's womanizer character, "You were with Chun Ji-ae huh". Chun Ji-ae is the same name as actress Kim Nam-joo's character in the popular drama "Queen Of Housewives"... which Yoon also starred in.

The list goes on. In the drama "Queen of Reversals", the character Mi-shil from the recent drama "Queen Seon-deok" and "Pal-bong Bakery" from the recent hit "Bread, Love and Dreams" are both incorporated into the story. Another very popular drama from 2010, "The Slave Hunters" showed a lighter side when the names of popular celebrities -- Lee Byung-hun, Yoo Jae-suk and Park Myung-soo -- were written in Chinese characters on an official document used in the scenes.

It seems that this game of drama "treasure" hunting with the viewers is only getting more and more popular. It only adds to the anticipation of waiting for next week's episode after every cliffhanging ending!

"Find The Hidden Jokes and Puns In Korean Dramas"
by HanCinema is licensed under a Creative Commons Attribution-Share Alike 3.0 Unported License.
Based on a work from this source