Finding anew what 'Koreanness' is 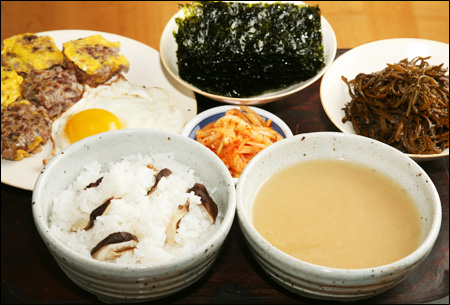 Traditionally Koreans put more emphasis on rice rather than side dishes because of the scarcity of food. / Korea Times file

It is not easy to concisely define what Korean studies is as it deals with a wide variety of genres ranging from language, economics, politics, culture and history to religion. To define the core meaning, a question of what is the most Korean thing should be answered first.

Twenty-two experts in diverse fields collaborated on a new book titled "The Pleasure of Korean Studies" published by Humanist, which traces "Koreanness". 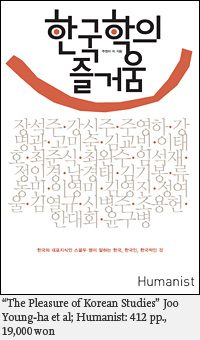 The book approaches various topics within Korean studies in both traditional and modern contexts encompassing philosophy, religion, science, medicine, economics and pop culture, which are closely related to what matters in modern Korean society.

As the meaning of Koreanness changes in accordance with time, the book offers a key clue to painting a portrait of Korea of the past, present and future.

Poet Jang Seok-ju delves into "han" (Korean sentiment of grievance or grudge) through such literary works as "Azalea" by Kim So-wol that portrays Koreans' passive desire for redemption after enduring pain. In "Arirang", the passive sadness and tenderness of Koreans and their grudges, yearnings, betrayals, despair and revenge are intensively expressed. Also, poet Baek Sok's poems and a popular song "Dongbaek Agassi" (Dongbaek Lady) by Lee Mi-ja represent the nation's dark history and sentiment.

However, over the last century Korea's "han" has rapidly been changing into "heung" (excitement) as economic development and democratization has resulted in growing self-confidence among its people. Dynamism is now synonymous with Koreans but it can also be tweaked into squandering and excessiveness, Jang argues.

Joo Young-ha, a researcher at the Academy of Korean Studies (AKS), finds the true Koreanness in its cuisine. Joo argues that the secret of Korean dishes characterized as
salty, spicy soups and relatively humble side dishes lies in rice. Traditionally Koreans put more emphasis on rice rather than side dishes.

According to "Soemirok" (a diary during the Japanese invasion of Korea in 1592) by Oh Hee-mun, a Confucian scholar, people ate a great amount of cooked rice (420 grams per meal) even in hiding. The record shows how Joseon people are widely known as gluttons often found in many historical records written by foreigners.

Joo said that as Joseon people suffered poverty, they tended to eat at any given chance, which contrasts with Japan's culture of eating less.

In a word, the essence of Korean foods is rice as there were no abundant foods in traditional society. The strong attachment to rice is attributed to the poverty of the past, Joo argues. But recently, the focus of Korean dishes is shifting from rice to other dishes and the seasoning is getting light as more diverse foods dominate tables.

"The old cultural structure of Korean food that originated from rice is now changing. Korean cuisine is taking a journey from the 20th century to the present. If we look at the changing process of Korean foods in modern times, the pleasure of Korean studies will be doubled", Joo said.

Im Seok-jae, a professor at Ewha Womans University, picks out "hanok" (traditional Korean house) as the most Korean thing. According to the professor, the hanok reveals a hybrid beauty mixing standardization and diversity, which can be applied to Koreans' traits. While it seems to have fixed structures in materials and composition, the hanok shows diversity in the directions of windows, doors and yards, set in accordance with residents' movements and needs.

Kim Young-jin, professor of Myongji University, suggests the interesting observations made through movie stars. Movie stars such as Song Kang-ho, Sol Kyung-gu and Jeon Do-yeon reflect Korean sentiment and desire. Song often depicts a character who comes across as odd in this absurd society while Sul portrays a figure who bravely breaks through the harsh reality, and Jeon often acts as a serious character who falls into deep desperation and madness and realizes herself after all. These characters deeply resonate with the Korean audience, Kim said.

Choi Jun-shik, professor of Ewha Womans University, observes the strength of Korean religions. Choi argues that both Western and Eastern, and both ancient and modern religions coexist in a harmony in Korean society, which is a rare case in the world.

The authors' observations reflect not only Koreanness but also the changes since 2000s and sheds light on its diverse spectrums.

"Finding anew what 'Koreanness' is"
by HanCinema is licensed under a Creative Commons Attribution-Share Alike 3.0 Unported License.
Based on a work from this source