(Above picture: Idol groups held a concert in Brazil, which was the first K-Pop Concert in South America.)

4Minute, Beast, and G.Na held a concert in Sao Paulo, Brazil, and their successful concert could foreshadow the boom of K-Pop in South America. K-Pop has been booming in Asia, Europe, and North America, and its popularity is spreading into South America, which can expect the "global boom of Hallyu".

The groups belonging to Cube Entertainment (hereafter referred to as Cube) such as 4Minute, Beast, and G.Na held an enthusiastic performance in the concert entitled "United Cube Concert in Brazil" at Espaco das Americas in Sao Paulo on December 13 (local time). The singing groups presented their representative songs during the concert for thirty two minutes and responded to explosive cheering from their fans in Brazil. Around 3,500 fans gathered at the venue and they were completely attracted by the splendid performances of 4Minute, and charismatic charms of G.Na. When the group Beast showcased an impressive performance with their excellent singing ability, the audience sang the song together with the group members in the Korean language, which gave more energy to the group members. Hyun Ah of 4Minute and Hyun Seung of Beast presented an exceptionally splendid dance together, and the audience gave an exclamation. Around ten audience members lost consciousness while enjoying the performances of K-Pop singing groups, and they were taken to the hospital by the staff members. G.Na said, "I am very happy to be here. I have never expected that I would receive this explosive response. I may not forget today's concert forever". Yoon Doo Joon of Beast said, "I had felt tense as it would be the first K-Pop concert in South America, but I was surprised to see those passionate fans in Brazil. The concert on the opposite side of the globe was a very meaningful moment to us". 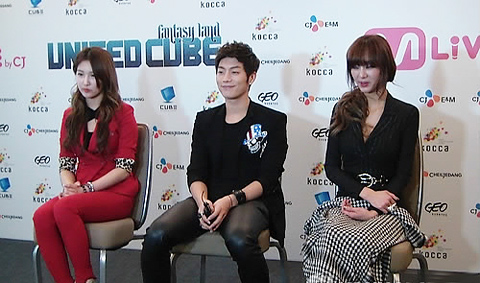 The "United Cube Concert" was first held in Seoul last August, and then it was held again at Budokan in Tokyo, Japan with 10,000 audience members. The third concert in London that was held on December 5 also achieved great success. "United Cube Concert in Brazil", which was organized by Cube and CJ E&M, was the first pay concert of K-Pop singing groups in South America, and it was the first trial of expanding the influence of K-Pop to South America. The representative of Cube, Hong Seung Sung, said, "We found out that Beast, 4Minute, and G.Na have around 7,000 to 8,000 fans in Brazil, and it is a greater number than we had expected. Considering the distance to South America, holding a concert in South America could face many difficulties including the cost, but we will actively promote more concerts in South America to explore new markets". In addition, many local media outlets in Brazil such as Globo, Rede Record, Veja, and Estado de Sao Paulo have shown great interest in the "United Cube Concert".