First Lady to Promote Jeju as Wonder of the World 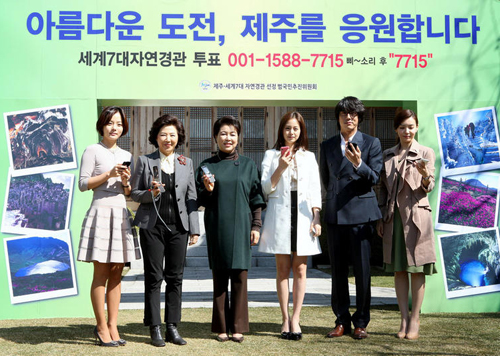 First lady Kim Yoon-ok poses with promotional ambassadors for Jeju Island's campaign for New 7 Wonders of Nature. To her right are Chae Rim and Go Doo-shim, and to her left Kim Tae-hee, Han Jae-suk and Park Sun-young. /Courtesy of Cheong Wa Dae

A Cheong Wa Dae spokesman said the first lady hopes that Jeju will garner strong support at home and abroad, adding the campaign provides an opportunity to discover the island's charms and raise awareness about them.

Kim said she will visit the resort island to promote the campaign and voted for Jeju by phone at the event. In a recent visit to Zayed University in the United Arab Emirates, she called on the audience to make efforts together for the selection of Jeju and the Bu Tinah archipelago of the UAE, which are among the 28 nominees.

The selection process is handled by the Swiss-based non-profit New7Wonders Foundation. The vote takes place online at www.n7w.com or by telephone.