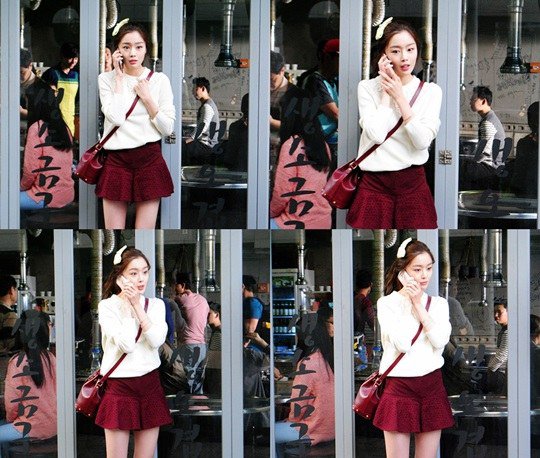 The photo shows her desperately looking for someone while talking to someone on the phone, then suddenly her face shows disappointment.

Han Sunhwa is the cheerful pop of the filming set and follows the directors orders promptly. She's very eager to act and has been through most scenes without much NGs.

Han Sunhwa stars in the drama as a princess and Mama-girl named Jang-mi who has been brought up without deficiency. Despite the fact that her parents lecture her about going to university and getting married with the man they choose for her, Jang-mi has a belief that she's going marry the man she loves. She then meets Cha-dol (Lee Jang-woo) and learns about love.

Producer Yoon Jae-moon says, "Han Sunhwa is one of the few idols who can act. She's going to improve much more through this drama and it will be helpful to her".

Han Sunhwa said, "I am honored to be in such a great piece of work with great people. My role is a major one so I feel pressure, but I am willing to learn. I hope I do my best to make everyone feel they can relate to my character".

"Rosy Lovers" is about a university couple who become parents too soon and learn the meaning of love and life. To be aired in the beginning of October.

"First look: Han Sunhwa in upcoming MBC drama "Rosy Lovers""
by HanCinema is licensed under a Creative Commons Attribution-Share Alike 3.0 Unported License.
Based on a work from this source