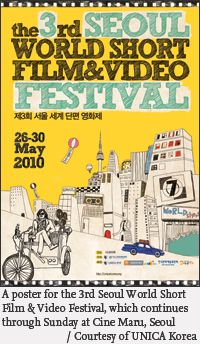 Andre Bazin, the founding father of the French New Wave, called short films "the film of the future", and indeed the medium seems fit for this age of YouTube clips that attest to increasingly shortened attention spans.

Short films are often considered a show reel piece for young aspiring directors, but more importantly they are ideal for experimentation and creativity. A case in point, master director David Lynch's shorts provide a potent, unabridged window into his cinematic world. To celebrate and appreciate this art form a couple of short film festivals around the city are expected to showcase new ideas.

The event is organized by UNICA Korea, the local branch of UNESCO's Amateur International Union of Cinema. It will feature shorts by fledgling filmmakers under four main categories according to genre: fiction, documentary, animation and experimental films.

Moreover, the festival acts as a preliminary competition to choose Korean works to be shown at the UNICA World Independent Film Festival. The 2010 edition of the international event will take place from Aug. 28 to Sept. 4 in Einsiedeln, Switzerland. The panel of judges this year includes Han Ok-heui (chair), who has served on the jury of the Pusan (Busan) International Film Festival (PIFF); Kees Tervoort, winner of the 5th UNICA World Independent Film Festival; director Cho Moon-jin; Media Est CEO Shin Dong-young; and Lee Yun-seok, who teaches at Hongik University.

The festival will also show collections of critically acclaimed works from abroad, including the Czech Republic, Croatia and Japan. Many films are offered with English subtitles.

Cine-Maru is located near exits 7 of Gwanghwamun Station or exit 4 of Seodaemun Station on subway line 5. Call (02) 3210-3357. For more information about the festival, visit unicakorea.org.

From June 24 to July 1, the festival will screen 61 works which were chosen among the over 700 submissions after three rounds of review. They will be screened according to genre: movies with a social message, melodrama, comedy, horror and action/thriller.

Last year, the festival created a buzz among film buffs and the media with its star-studded participants. Tickets for most screenings were sold out as fans tried to catch a glimpse of director Bong Joon-ho, who acted as a representative festival director, to hear him say a few words, or to see top stars Synn Mina and Won Bin give their input as guest judges.

The festival will take place at CGV Apgujeong in southern Seoul. The theater is located near exit 3 of Apgujeong Station on subway line 3. For more information about the festival, visit Open the link

"Fledgling directors thrive at short film festivals in Seoul"
by HanCinema is licensed under a Creative Commons Attribution-Share Alike 3.0 Unported License.
Based on a work from this source