"For The Emperor" Lee Tae-im vs. "Human Addiction" Lim Ji-yeon 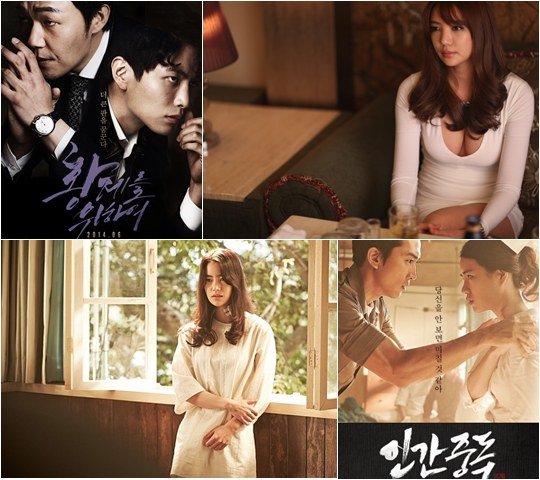 Lee Tae-im from "For The Emperor" and Lim Ji-yeon from "Human Addiction" have heated up the theaters.

"For The Emperor" is Busan-based movie about two men who dream of a different kind of an emperor in a world of chance. Between them is Lee Tae-im who is a trending right now.

She takes on the role of a female boss Yeon-soo who steals the heart of Lee Hwan (Lee Min-ki), a youth in a gang organization with her dangerous, yet critical beauty.

Unlike the intelligent characters she's shown in movies "SIU" and "Days of Wrath", this time, the actress has turned into a deadly femme fatale with the most amount of exposure since her debut. The climax is the bed scene she carries out with Lee Min-ki.

To Lee Min-ki, who is overwhelmed with more and more desire every day in this cruel world, the only comfort he has is Lee Tae-im. She opens up to this man who recklessly comes forward to her.

Lee Tae-im is also the only female star in this rough movie and drew the attention of everyone with her detailed and sensitive performance.

"Human Addiction" was released on the 14th of May. It is about a secret romance between a man and a woman in a military housing facility. Song Seung-heon plays Kim Jin-pyeong who falls love with his subordinate's wife Jong Ga-heun (Lim Ji-yeon).

Lim Ji-yeon made her first feature film debut with "Human Addiction" and has showed a performance so outstanding it's hard to believe the short length of her career.

These two women are doing their jobs in heating up the theaters and drawing people in.

Meanwhile, "For The Emperor" will be released on the 12th of June.

""For The Emperor" Lee Tae-im vs. "Human Addiction" Lim Ji-yeon"
by HanCinema is licensed under a Creative Commons Attribution-Share Alike 3.0 Unported License.
Based on a work from this source