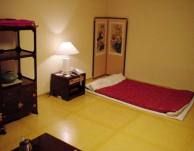 An ondol-heated room with an ibul (bedding) and other traditional furnishings
Commissioned to build the Tokyo Imperial Hotel, America's most famous architect Frank Lloyd Wright traveled to Japan in 1916. During a visit to a Japanese home, he was shown a room with a paper-covered floor heated by Ondol, Korea's time-honored under-floor heating system.

Assumed to be invented in the Goguryeo Kingdom (37 B.C.-A.D. 668), the "ondol" heating system originally worked by heating a stone under the floor from the smoke of a fire built at one end of the room.

Hailing ondol as the ideal heating system, Wright began incorporating it in his buildings back in the U.S. and even invented a modified ondol system, using hot water running through pipes instead of the hot exhaust through flues.

Centuries after its invention, this uniquely Korean heating method is now adopted in many parts of the world. In China, about four percent of the recently built structures have ondol heating. Influenced by "Hallyu", the popularity of Korean pop culture overseas, some Chinese, especially the wealthy, build homes with ondol. A Chinese homemaker commented that the ondol rooms are easy to clean while helping to keep the air warm but less dry.

Ondol now warms up and cools not only homes, but public structures like airports, train stations, department stores. Even one of Denmark's landmarks, the Copenhagen Opera House, utilizes the ondol's cooling and heating system.
Having set an ondol promotional hall, Japan aims to pull its supply rate to 35 percent. Ondol is installed in 50 percent of the buildings in Europe.

Past tests have shown that this centuries-old heating system distributes and maintains the heat in a more stable manner than the convective heating method of radiators or furnaces, thus more practical and energy-efficient without polluting the air in a room.

Furthermore, direct heat conduction through the skin helps with blood circulation, while conducive to the Oriental medicine idea of well-balanced health: "cold head and warm feet".

Ondol, originally used only under the floor, is now installed in airport roofs and under roads to melt snow and help abate noise. A Korean small company developed a film-type electronic ondol and recorded 340 million (about $350 thousand) in sales in the first year after its debut.

"Foreigners warming to ondol, Korea's traditional heating system"
by HanCinema is licensed under a Creative Commons Attribution-Share Alike 3.0 Unported License.
Based on a work from this source