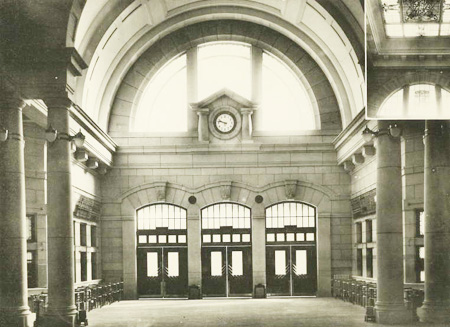 The main hall of the old Seoul station in 1925

The former Seoul Station, which halted train services to give way to the KTX in 2004, has reopened as a cultural space.

The space is now called Culture Station Seoul 284. The new name commemorates the building, which was built in 1925 and was designated Historical Site No. 284 in 1981.

The renovated station presents the "Countdown" exhibition, featuring a variety of works from sculpture to performance art, prior to its grand opening in March 2012.

"Seoul Station, where people dashed to take trains, is reborn as a cultural space embracing history and the future", said Minister of Culture, Sports and Tourism Chung Byoung-gug at the opening ceremony of Culture Station Seoul 284, Thursday. 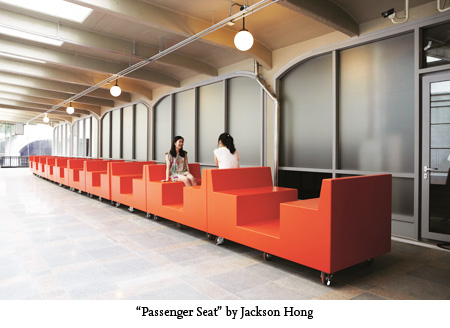 The exterior of the station remains just as people remember it with its signature red bricks and domed roof. The VIP lounge was restored based on old photos of former Presidents Syngman Rhee and Park Chung-hee that were taken in the room.

Ahn Chang-mo, the Kyonggi University architecture professor who oversaw the station's restoration, said, "We tried to restore the station to the way it was in 1925 while preserving some 80 years of the building's history as well".

The station is filled with works from some 20 artists, including Gim Hong-sok, Lee Bul, Yee Soo-kyung and Ahn Kyu-chul. The exhibition is expected to grow through February and 35 artists will display their works by the end of the exhibition. Most of the works are site-specific, interpreting the history and significance of the station into art. 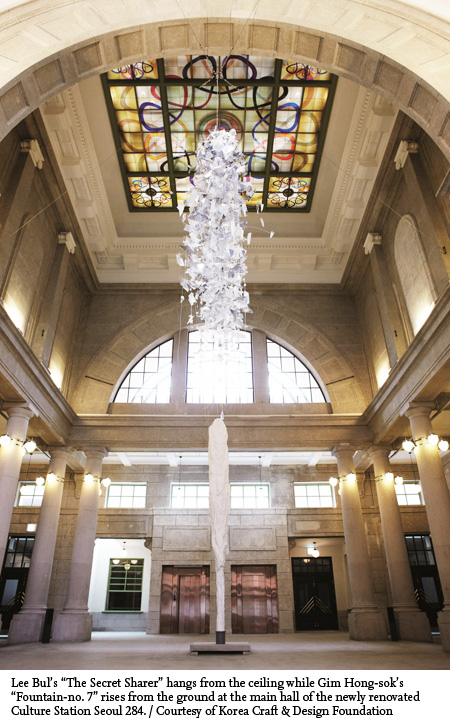 A colorful stained-glass window decorates the ceiling of the main hall, where Gim Hong-sok's "Fountain-no. 7" and Lee Bul's "The Secret Sharer" are displayed.

Even the benches stand out. At the back of the main hall, Jackson Hong's "Passenger Seat", a series of red benches with wheels, reminds visitors of riding trains.

Choreographer and dancer Ahn Eun-me presented "Ga Seum Geol Rae - Made in Seoul Station" at the opening. Ahn was dressed in white like a queen, spraying water on guests as she stood on a landing. Twenty-three performers, including 10 dancers and nine actors, wearing aprons made from white cotton gloves and holding cleaning equipment, wandered around the station and wiped the building, symbolizing "ssitgim-gut", or a shamanic ritual of purification. 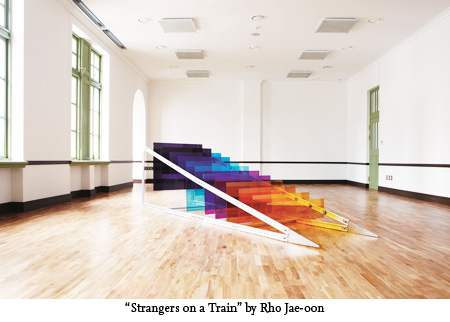 Video artist Lee Tae-seok recorded the performance, which will be screened throughout the exhibition for those who could not attend the opening.

The Restoration Exhibition Room on the second floor reveals the original structure from 1925. Construction materials collected during the restoration process are also on display.

Meanwhile, Seoul Square Media Canvas, a large LED screen installed on the exterior of the Seoul Square building across from the station, screens "Bottari Truck - Migrateurs" (2007) by Kim Soo-ja. Kim is known for her video series following a truck carrying "bottari", or tied bundles, and the work spans several European countries.

"'Bottari Truck' was selected to be projected as a part of "Countdown", because her artwork reflected the characteristics of Seoul Station where people depart and arrive and where travelers coexist with homeless people", an official of Seoul Square Media Center said.

The exhibition runs through Feb. 11, 2012. Admission to Culture Station Seoul 284 is free through September and costs 2,000 won from October. The exhibition is closed Mondays. For more information, visit countdown2011.org.